Publisher's description
The Star Trek: Ships of the Line 2010 Wall Calendar will continue to delight longtime fans and amaze newcomers with the remarkable artistry demonstrated in its unique, dramatic depictions of the U.S.S. Enterprise and other mighty starships in action. Featuring fourteen pieces of Star Trek art created exclusively for this calendar and not available anywhere else, this calendar is always highly anticipated by loyal Star Trek fans.

Note: Quotes are all from co-author Doug Drexler's blog. [1](X)

"Andrew Probert "Refit at Station Gray" Well what can I say? It's freaking Andy Probert! If I could I would buy him and keep him for my own. Here is the guy I want designing my Star Trek movie! Are there folks out there who really believe that there is nothing dynamic left to be done with this territory? I'm thrilled enough as it is, and then Andy honors me by using my Romulan shuttle design in one of his paintings! Can you believe he does this with some gooey colors on a stick? Every molecule of chroma is placed there by hand. I have to sit down."

"Max Gabl and Neil Wray "Flight Deck" Sexy time starfleet style! This is just a superb image from the TOS remastereds, sweetened up with all the classic goodness you could ever want. I almost swallowed my tongue when I saw it! If loving this is wrong, I don't want to be right!"

"Gregory Stewart "Operation Return" Here is another crazy man from fandom! Greg Stewart! Step up here and get your diploma! Great sense of action and composition, and buddy, the image fairly crackles with excitement! Just a great image that you want to look at for a month. You can tell just by looking at it that Greg was excited!"

"Doug Drexler "No Bloody A, B, C, or D" This guy is a bum, I'd take Max Rem anyday!" (tongue in cheek; Max Rem is Drexler's pseudonym)

"With two previous pages under his belt, Mark Rademaker is a SOTL veteran. Mark came to me through Andy Probert, who, impressed with Mark's originality, thought I should give him a shot. Later, when Marco Palmieri and Margaret Clark were preparing a new Trek novel series called "Aventine", they needed a new distinctive starship... well, Mark was just the guy for the job, and the 2010 calendar was the perfect place to launch her!" [4](X)

"My name is Joe Diaz. I worked with John Han... I built both of the models for the scene from "Cause and Effect"."

"Robert Wilde: Andy Probert and I were knocking around ideas on how to inject some new life into the Calendar when he asked me if I had considered some of the fan talent knocking around out there in Cyberspace. The minute he said it I knew it was a great idea. Robert Wilde is one of those guys. Holy smoke! I love Bob's page, and wet my pants when I first saw it. Beautiful work!"

For the 2014 edition of the Ships of the Line, several images were re-named:

The April and centerfold image did not appear in the 2014 edition of the Ships of the Line. 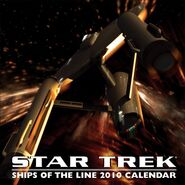 December spread
Add an image to this gallery

Retrieved from "https://memory-alpha.fandom.com/wiki/Star_Trek:_Ships_of_the_Line_(2010)?oldid=2425048"
Community content is available under CC-BY-NC unless otherwise noted.