Publisher's description
Featuring fourteen pieces of art created exclusively for this calendar, the Star Trek: Ships of the Line calendar is highly anticipated by Star Trek fans each year. This year's edition will be no exception as it delights and amazes with remarkable artistry in its unique, dramatic depictions of Star Trek's ships.

For the 2014 edition of the Ships of the Line, several images were re-named:

The February, March, and June images did not appear in the 2014 edition of the Ships of the Line. 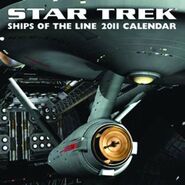 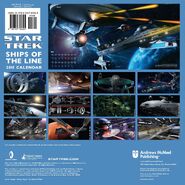 Promo for the January spread