Publisher's description
A longtime favorite among hardcore Trekkers and sci-fi fans, Star Trek: Ships of the Line 2016 Wall Calendar is a unique collectors addition celebrating the landmark 50th anniversary and gives aficionados something they cannot get elsewhere – spectacular original illustrations showcasing the franchise's most famous starships and vessels.

The characteristic horizontal format maximizes detail in the up-close views of each ship and puts the viewer right in the center of the iconic moments from Star Trek history, but remains a practical addition to any workspace.

This image also includes a small panel containing orthographic views of the ship and the artist's signature. 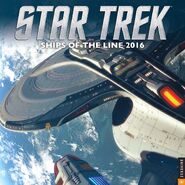 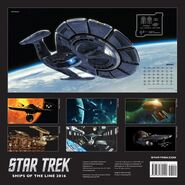 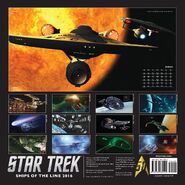 January spread, UK edition
Add an image to this gallery

Retrieved from "https://memory-alpha.fandom.com/wiki/Star_Trek:_Ships_of_the_Line_(2016)?oldid=2425021"
Community content is available under CC-BY-NC unless otherwise noted.