Blurb
The 2019 edition of this fan-favorite horizontally-formatted calendar is dedicated to showcasing spectacular images of the most famous vessels from the iconic franchise in a variety of iconic scenes and settings.

The panoramic calendar opens horizontally to maximize the detail and drama of each stunning piece of Star Trek art.

Note: from the fan film Horizon, produced by Kraft.

Note: this image is a painting rather than CGI.

Note: as with Eaves other image in this edition, this one is a painting. 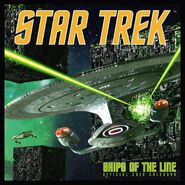 June spread, UK edition
Add an image to this gallery

Retrieved from "https://memory-alpha.fandom.com/wiki/Star_Trek:_Ships_of_the_Line_(2019)?oldid=2424998"
Community content is available under CC-BY-NC unless otherwise noted.