Star Trek: Stardate Collection is a Blu-ray Disc collection, featuring the first ten Star Trek films. Each film has been digitally remastered in high-definition, and is based on the theatrical cut in each instance. The contents of the set are essentially identical to that of the previous Star Trek: Legends of the Final Frontier Collection, including the Library Computer and Star Trek I.Q. BD-Live features except in smaller packaging. The digital Star Trek: 10 Original Movies also has similar contents. The regular release came with the discs mounted on two Digipacks packaged in a slipbox.

Two versions have been released in Japan. The first release has the same contents as released elsewhere. The second, released on 11 October 2013 is a "Premium Edition" with a limited run of 500 copies and is exclusive to Amazon.co.jp. Included in this set is a film cell from each of the first 10 films and a Star Trek-themed USB flash drive with storyboards and posters. The disc artwork is also unique to this set. The whole came packaged in an individually numbered silver-embossed box.

In the UK, the set was reissued in 2016 on the occasion of Star Trek's 50th anniversary, with the cover art of the slipcover adjusted for the commemoration.

Region A has seen an US and Canadian 2019 Blu-ray reissue of the set as "Star Trek: 10-Movie Stardate Collection", and while featuring re-imagined cover art besides the slightly altered title, otherwise identical in contents, though this time around having all its discs mounted in a single multi-disc Viva Elite case with a slipcover. As such, it was reissued in the USA yet again in 2020, albeit without the two bonus discs on that occasion. 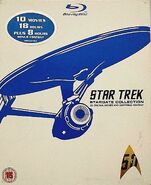 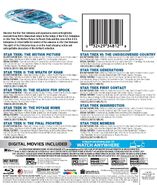 While in some cases marketed as region-restricted, this release is in actuality region-free as this has increasingly become commonplace for the Blu-ray format. [1]