The game is enhanced with numerous interactive live action scenes that can affect crew performance, which feature William Shatner as Kirk, Walter Koenig as Pavel Chekov, and George Takei as Captain Hikaru Sulu as celebrity guest instructors at the school.

The game features a number of simulator training missions – including the dreaded Kobayashi Maru scenario. Others are based on the exploits of Kirk's Enterprise: for instance, a simulated recreation of Battle of the Mutara Nebula, which Captain Kirk notes ruefully is used to reinforce the need to take the proper defensive precautions when encountering a non-communicative ship he neglected in the actual incident.

From the box
There is a Place in the Galaxy Where Legends are Born. WELCOME TO STARFLEET ACADEMY.

Captain Kirk, Commander Chekov, Captain Sulu. Before they were legends, they were cadets at the most celebrated training facility in the universe – Starfleet Academy.

A vast array of missions will test your ingenuity, leadership and courage – and determine if you've got what it takes to graduate first in your class. Going where no simulator has gone before, you'll take on 30 of the universe's finest starships, from cloaking Klingon Birds of Prey to the Romulan Heavy Cruiser. All the while, Captain Kirk, Commander Chekov, and George Takei in a special appearance as Captain Sulu, are there to provide instruction as well as inspiration.

Because the plot follows multiple diverging storylines, this plot synopsis follows the ideal choices one should make to ensure the total completion of the game

In the year 2288, two years before Captain Sulu takes command of the USS Excelsior, Cadet David Forrester (the player) enrolls in Starfleet Academy's command college. There, he is tasked to work with a team and build a bridge crew. At first, the team's bristling personalities do not coalesce very well. Despite success in their simulated training missions, Cadet Geoff Corin, the helmsman, and Cadet Robin Brady, the engineer, struggle academically; Corin because of his penchant for an active social life and Brady because of his introverted personality and both of whom have taken a liking to Cadet Faith Gage.

As captain of the team, Forrester struggles to deal with his teammates difficulties and ultimately sets them on the right paths, but, problems are complicated further when Cadet Vanda M'Giia, the Andorian communications officer, suffers a tragic personal loss when her mother is killed when an unknown attacker destroys her home colony on the planet Biceia. Meanwhile, Commander Chekov enlists Forrester's help in developing new simulator missions for use at the Academy.

Within the ranks of the cadets, there is a groundswell of anti-Klingon sentiment, many of whom believe that the Empire is responsible for the destruction of the Federation colony. A group known as the "Vanguard", led by Cadet Frank Malan, begin speaking out about Federation policies towards potentially aggressive races, such as the Klingons and the Romulans. Soon, Forrester's Vulcan science officer, Sturek, is involved in a mysterious explosion at an Academy science lab containing data revealing who the real attackers of the colony were. Sturek is confined to quarters and an investigation is launched. While the command staff believe that Sturek is innocent, they recruit Forrester to help them determine who the real culprits are, after Forrester learns how James Kirk reprogrammed the Kobayashi Maru scenario from the captain himself.

Forrester is confronted by Gage, who informs Forrester that she believes that Brady may have been involved in the bombing, having observed a bomb schematic in his quarters shortly before the explosion. Because of Forrester's work with Chekov, he is able to access the Academy's computer lab and the two of them set out to confirm Gage's findings, but, when it becomes clear that it was she who was responsible for the explosion and that she is a member of the Vanguard, she attempts to kill Forrester with a phaser, only to be apprehended by Captain Sulu. Sturek is cleared of all suspicion.

However, the Vulcan soon sets to work to recover the data that was lost in the explosion and determine who the attackers of Biceia really were. Captain Kirk soon delivers a fragment of the attacking vessel from another incident to Sturek and he and Forrester set to work to analyze it. Meanwhile, Brady informs Forrester that M'Giia has been attending Vanguard meetings. Wounded over the death of her mother, she believed that the Vanguard had all the answers she was looking for. Confronted by Forrester, the two of them hatch a plan to infiltrate the organization.

The Vanguard (with Malan in particular) hope to install Captain Kirk – their personal hero because of his experience in dealing with the Klingons and his penchant for molding Starfleet rules and regulations – as the leader of the "New Federation" and set explosives in the offices of key Federation officials and Starfleet security. Forrester brings Kirk with him and deceives the Vanguard into believing that Kirk will cooperate with them. However, Forrester uses the opportunity to blow out the timers on the explosives while Kirk subdues the Vanguard with a phaser set on wide-angle stun.

Shortly before graduation, Forrester and Sturek are able to complete their analysis of the alien attackers, whom Sturek names the "Meclanti", and believe they have found a way to communicate with them by mimicking their actions. The Academy board is impressed and, with Captain Kirk's convincing, gives Forrester's crew of cadets command of the Enterprise for two months in an attempt to locate the Meclanti. The new crew of the Enterprise sets out into space.

Near the Klingon Neutral Zone, the Enterprise finds more evidence of Meclanti attacks and is soon alerted by a distress call from a Klingon planet that the Meclanti are in Klingon space. With permission obtained from the Klingon planet to cross the border, the Enterprise comes face to face with the Meclanti. Sturek's plan to mimic the actions of the Meclanti proves successful and communications are established. The Enterprise crew learns that the Meclanti are searching for a planet rich in dilithium crystals to sustain themselves and promise to find them such a world within Federation space. However, a rogue band of Klingon ships arrives and plan to destroy the aliens once and for all by detonating the system's star and wipe them out with a supernova. The Enterprise is able to destroy the rogue Klingons, save the Meclanti, and keep them out of the tensions between the Federation and the Empire.

Returning command of the Enterprise back to Captain Kirk, the captain informs them that Chancellor Gorkon is most impressed with the Federation's actions in this matter. While Kirk is skeptical about Gorkon's motives, he raises a toast to the next generation of Starfleet of which Forrester and his crew are sure to be a part of. 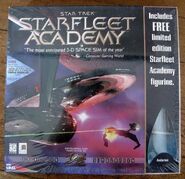 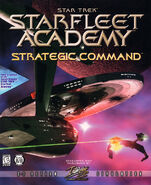 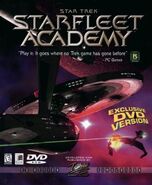 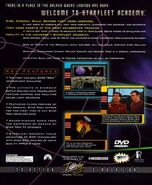