Starfleet Command is an open world game; a player's actions during a mission will affect the game world (i.e, if the player succeeds, their chosen faction also succeeds).

While the basic campaigns are meant to emulate the 'General War' period of the Star Fleet Battles timeline, the main storyline of Starfleet Command spans several unique faction-based missions, focusing on the disappearance of the Organians. These missions are triggered by joining the elite organization(s) of a various faction.

United Federation of Planets (Starfleet Special Task Force) – After it is confirmed that the Organians have departed their planet, Starfleet beings to develop new weapons systems, before discovering that forces from the Terran Empire have somehow crossed over from the mirror universe and are attempting to take over the Federation.

Klingon Empire (Black Fleet) – After confirming that the Organians have departed for parts unknown, the Klingon Empire attempts to take advantage of heightened galactic tensions, before discovering that an ancient enemy has returned from beyond the grave with vengeance in mind.

Romulan Star Empire (Tai Praiex, Tal Shiar) – The outbreak of a plague sees the Romulan Empire doing what is necessary to combat it, before political machinations by the leader of the Tal Shiar throw the future of the Empire into question.

Lyran Star Empire (Iron Fang, Red Claw, & Mountain Watchers) – The internal political squabbles fo the various Lyran clans must be put on hold when it is discovered that an old enemy is attempting to conquer from within. Note: the Mountain Watchers clan cannot be joined by the player.

Hydran Kingdom (The Keepership) – With 'star beasts' (the Hydran name for the game's NPC space monsters) on the loose thanks to the disappearance of the Organians, the Keepership has its hands full, before discovering that other Hydran clans have other plans.

Gorn Confederation (The King's Guard, The Defenders of the Egg, & The Guardians Errant) – The rivalries between the Gorn clans must be put on hold when a clutch of Gorn eggs goes missing, and the thief turns out to be the last party anyone expected.

Starfleet Command is divided into three segments: a "Campaign" game, several "Skirmish" games and a multiplayer component. The "Dynaverse" (the game's 'campaign' mode) resembles an adventure in which the captain of the ship (the player) earns prestige by successfully completing missions. These prestige points can be used to 'purchase' new ships, as well as repair and refit them and assign crew members. The "Skirmish" and "play-and-forget" games are fast and self-contained and help the player become familiar with the game and the missions available in the "Dynaverse". In multiplayer mode, the player connects via IP or using a game matching service such as Gamespy to challenge other Human players instead of the computer-controlled AI.

The player can play as one of six races:

Starfleet Command was released by Interplay when the Star Trek computer-game franchise was experiencing incredible popularity. Interplay had previously released Star Trek: Starfleet Academy, which had given the company a dominant position among the three primary game publishers of the time.

The release of Starfleet Command is considered to be the beginning of a 'Golden Age' for licensed Star Trek games; between 1999 and 2001, Interplay and Activision started producing more and better games in the franchise. The trend continued until 2001, when Interplay bowed out and Activision took over all of the main components of the gaming franchise.

The game places the player in command of a single vessel, which the player must maneuver in combat to take advantage of weaknesses in the opposing ships' design. Specific objectives are presented in the mission briefing, most of which involve the player investigating alien planets, ships or stellar objects.

The player must manage his ship's weapons, shields, propulsion and life-support via a control panel presented on the left side of the screen.

The panel contains various ship settings (weapons, velocity, and shields), and reconfigures depending on the player's current action; the player can move the ship by clicking on it in the 'space' portion of the window, or choose from several more complicated maneuvers from a selection on the panel.

In Starfleet Command, ships are treated as complex entities, with a variety of tactics and resources. Starships are large mobile 'bases', and players spend more time managing power-levels and allocating resources than engaging in combat.

During a battle, the player may use any of a number of weapons, such as beam weapons, missiles, shuttles, marines and tractor beams. The effectiveness of any particular weapon varies according to the enemy's ship type. By crippling specific sub-systems, the player can weaken or disable the enemy vessel, rather than destroying it outright.

Some missions require the use of specific weapons or systems; a player may be asked to use a tractor beam to rescue a disabled ship, or send in a squad of marines when capturing an enemy vessel.

In late 1999, a Gold Edition (called the Captain's Edition in Germany) was released with 26 new missions.

In 2000 a third edition was released, dubbed the Neutral Zone Edition. This was a low-priced stripped down version that only included the Federation and Klingon races. 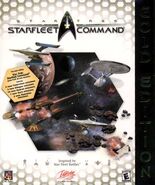 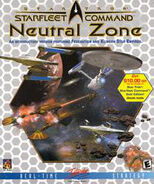 Neutral Zone Edition cover
Add an image to this gallery

Retrieved from "https://memory-alpha.fandom.com/wiki/Star_Trek:_Starfleet_Command?oldid=2436068"
Community content is available under CC-BY-NC unless otherwise noted.