Star Trek: Strange New Worlds is the tenth overall Star Trek spin-off series, and the first direct spin-off of Star Trek: Discovery that was announced on 15 May 2020. It was produced by CBS Studios and stars Anson Mount as Christopher Pike, Ethan Peck as Spock, and Rebecca Romijn as Una Chin-Riley.

The official announcement stated that "the series will follow Captain Pike, Science Officer Spock, and Number One in the decade before Captain Kirk boarded the USS Enterprise, as they explore new worlds around the galaxy." [1]

Executive Producer and Co-creator Akiva Goldsman told Variety, "We're going to try to harken back to some classical 'Trek' values, to be optimistic, and to be more episodic. Obviously, we will take advantage of the serialized nature of character and story building. But I think our plots will be more closed-ended than you've seen in either Discovery or Picard. ... I imagine it to be closer to The Original Series than even DS9. We can really tell closed-ended stories. We can find ourselves in episodes that are tonally of a piece." [2]

When talking to Deadline on 16 August 2020 Co-executive Producer Alex Kurtzman elaborated, "I think Strange New Worlds, under the guidance of [showrunners] Henry Myers and Akiva Goldsman, it's going to be a return in a way to TOS [Star Trek: The Original Series]. We are going to do stand-alone episodes. There will be emotional serialization. There will be two-parters. There will be larger plot arcs. But it really is back to the model of alien-of-the-week, planet-of-the-week, challenge-on-the-ship-of-the-week. With these characters pre-Kirk's Enterprise... I think what people responded so much to in all three characters is this kind of relentless optimism that they have. And that they are at the young phase of their careers." [3]

When the news of showrunner Alex Kurtzman's five-year Star Trek development deal with CBS All Access was announced on 19 June 2018, a show dealing with Christopher Pike, Spock, and the USS Enterprise was not considered for inclusion in any Star Trek line-up. [5]

Star Trek: The Original Series characters, Christopher Pike, Number One, and Spock, were introduced for season two of Discovery and were signed only for that season. [6] [7] It prompted Anson Mount to quip with a "#WillActForFood" hashtag on his Twitter account, making it known that he and Spock performer Ethan Peck were on the job market again shortly after live-action production on season two had wrapped. [8] Following the positive reception to the second season of Star Trek: Discovery, fans circulated a petition in support more appearances of Mount as Captain Pike and Peck as Spock, including the idea of a full new series. [9] Mount expressed support for the fan petition, stating he felt "humbled and deeply touched by this amount of love" in an 14 April 2019 Facebook entry. [10] [11] Peck also expressed interest in returning to the role of Spock. [12]

In January 2020, Kurtzman confirmed he and Akiva Goldsman were having "active conversations" about a new series involving the crew of the Enterprise. [13]

On 15 May 2020, CBS announced a new series "based on the years Captain Christopher Pike manned the helm of the USS Enterprise." [14] The announcement included that Strange New Worlds would feature Anson Mount as Captain Pike, Ethan Peck as Mr. Spock, and Rebecca Romijn as Number One, all reprising their roles from the second season of Star Trek: Discovery.

TRR: "Hide and Seek" presented "The Cage" as the pilot to this series, as opposed to Star Trek: The Original Series.

Prior to its premiere, Paramount+ specifically suggested that viewers could prepare for the launch of the new series by specifically checking out the DIS Season 2 episodes:

StarTrek.com presented its own list of episodes to watch before the premiere. In addition to the aforementioned Discovery episode "Through the Valley of Shadows", this list of original series episodes served more as a primer for familiarizing or refamiliarizing viewers with the series' cast: 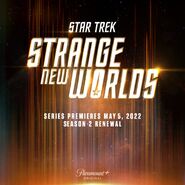 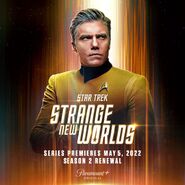 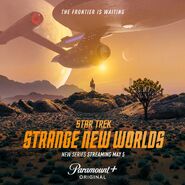 Teaser poster as header for Paramount+

In March 2021, Eaglemoss/Hero Collector's Star Trek Universe: The Official Starships Collection premiered at retail. A new starship miniatures partwork and product line, it features Strange New Worlds starships, combined with ships from Star Trek: Discovery (after the release of issue 33 of the DIS partwork) and Star Trek: Picard. The line's manager indicated that CGI assets of SNW's starships had not yet been received from the show's producers, as of February 2021, which was not that surprising as actual production on the new series had yet to start at that point in time. [15] Replicas of Pike's USS Enterprise (as seen in DIS) have previously been produced by the company.