The Star Trek: Strategic Operations Simulator arcade game by Sega was the first official Star Trek arcade video game. Released in 1982, it was inspired in part by the Kobayashi Maru simulation seen in Star Trek II: The Wrath of Khan. Its vector graphics display was meant to mirror those seen in the beginning of the film. Leonard Nimoy and James Doohan provided the voices of their Star Trek: The Original Series characters.

The game was ported by Sega to non-vector versions for several of the better known game systems and home computers of the time – namely the Atari 2600, Atari 5200, Colecovision, Apple II, Atari 8-bit computer family, Commodore 64, TI-99/4A, and VIC-20. [1] The gameplay differed slightly from the arcade version in each translation.

The arcade game was released in two versions. The standard "upright" game cabinet model was fashioned after similar games of the day, with standard screen and control layouts. In addition, a special "Captain's Chair" sit-down model was fashioned to simulate that on the bridge of the refit USS Enterprise as seen in the first three Star Trek films. Its controls were built into the chair in which the player sat, with the game screen situated in a separate console in front of the player. In both cases, the game included a rudimentary voice simulator which used Scotty's voice to give you command, and Spock's to welcome you aboard and announce entry into each sector. (Neither was the actual actor's voice, but a computerized impersonation.) 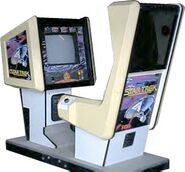 Gameplay consisted of piloting the Enterprise through various space sectors which have starbases that are under attack by Klingon cruisers, mysterious alien anti-matter saucer ships and the Nomad probe. (TOS: "The Changeling") The player steers the ship by a rotary knob (situated either on the upright console's front or the sit-down chair's left-hand arm), while control for impulse, warp drive, phasers, and photon torpedoes are a set of four game buttons (next to the dial on the upright or on the right-hand arm of the sit-down's chair). The games creen is divided into three sections. The upper left shows the player's score as well as the ship's amount of shield energy (green line), photon torpedoes (red boxes) and warp energy (blue line). The upper right gives an overall view of the sector, including enemy ships and starbases (with which the ship can dock to re-energize shields, restock torpedoes, re-fuel the warp drive, and repair any damage suffered from attacks). The lower part of the screen shows a direct forward view (similar to the viewscreen on the Enterprise bridge).

The player has only one ship to use, so if it is destroyed, the game is over. The ship can be attacked by the Klingon ships (either from disruptor fire or collision), by the anti-matter saucer (which drains the Enterprise's warp power if it comes in contact with the ship), or by Nomad and the spacial mines he lays. Damage is first absorbed by the shields (shown in the upper right by a green oval surrounding the Enterprise). When drained, an additional hit takes them offline. A further hit destroys the torpedo controls (and any torpedoes the player has). The next hit takes out the warp drive. One more hit destroys the ship entirely. Any and all damage can be repaired by docking with a starbase.

The game has forty "simulation levels" to play through. The format is usually five attack waves by Klingons and saucers, followed by an empty sector in which Nomad is laying mines.

In the Klingon levels, there are three versions of the Klingon cruiser: Red (which immediately target the starbases), Purple (which come after the Enterprise with disruptor fire), and White (which try to ram the Enterprise). All three types can be destroyed by a single phaser or torpedo hit. (Further note: A Red Klingon ship turns Purple if its destroys the Starbase it fires on, and a Purple ship can turn White if you take too long to clear a sector.) The saucers can only be destroyed with a single phaser hit, as the antimatter in the torpedoes has no effect.

In the Nomad levels, Nomad must be destroyed before he can escape the sector. The mines he lays can be destroyed by phaser, torpedo, or collision, but their blast area can cause damage to the ship, so they are best either left alone or destroyed from a distance. Like the anti-matter saucers, Nomad can only be hit by phaser at close range (it is shielded from torpedo attack).

A Vectrex Arcade System game titled Star Trek: The Motion Picture came out about the same time, but only bears minor resemblance to this game in graphics or gameplay and was not a "port" or translation of this game.