Star Trek: Tactics is a series of multi-player or multi-team table games that are manufactured by WizKids.

Star Trek: Tactics premiered at retail in February 2012 and includes thirty-three ships from the Federation and Klingon factions.

The starter kit and booster pack ships utilize the "Clix" system of game play and are compatible with WizKids' long-running series of "HeroClix" games. In the starter game, two or more players command multi-generational fleets of starships while representing either the Federation Starfleet or the Klingon Defense Force.

Booster pack ships are sold in sealed "blind boxes" without printed information about which ship is inside, similar to the marketing model used by gashapon toy manufacturers in Japan. Unpainted versions of all of the ship molds from the first Tactics game were released earlier in the Star Trek: Fleet Captains game. Later installments of Tactics saw WizKids introduce a number of Star Trek starship designs which had not been produced as licensed miniatures before.

The company released the Star Trek: Attack Wing game in August 2013. [1] Apart from being mounted on different stands, many of its painted ships are very similar to those released in the Tactics line. Unlike Tactics, Attack Wing's Federation ships do not have names or registry numbers painted onto their hulls and can be used to depict a number of different starships. In 2016, mono-colored versions of some of these starship molds were used again for WizKids' Star Trek: Frontiers game.

The promotional Star Trek: Tactics Organized Play Kit was made available to retailers for tournament play in early 2012. Three copies of the Warship Voyager model and five copies of an additional double-sided map were included.

Notes: the D7-class and K't'inga-class Klingon ships share the same mold.
Wizkids originally slated the USS Montgolfier to be the non-canon Saber-class USS da Vinci (β) from the "Starfleet Corps of Engineers" novels but licensing limitations prevented this. This is the first appearance of this name and registry, which was created in conjunction with CBS and is a reference to the Montgolfier brothers of aviation fame. [2] Its card lists the registry as NCC-40109 but NCC-94943 is printed on the ship's hull. 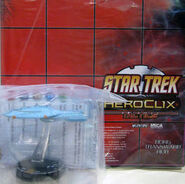 For Tactics II and its subsequent iterations, many ship names were introduced specifically for the game or were appropriated from non-canonical Star Trek works, in consultation with CBS.

The promotional Star Trek: Tactics II Organized Play Kit was made available to retailers for tournament play in early 2013. Three copies of the Battleship Enterprise model and five copies of an additional double-sided map were included.

Notes: The IKS B'Moth uses a different mold than the D7-class/K't'inga-class ships from the first set. The bridge structure is improperly twisted by 90° so that the bridge dome is on the left side. The ship has less molded detail on the rear superstructure and warp nacelles.
On their cards, the IRW N'Ventnar is identified as Sela's warbird and the Robinson is described as Sisko's attack ship. The Battleship Enterprise takes its name from a description of the ship seen in TNG's "Yesterday's Enterprise". 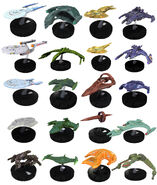 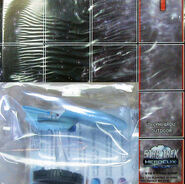 In October 2013, WizKids released a new game with thirty-three ships including vessels from the Bajoran, Borg, Federation, Kazon, Klingon, Romulan, and Species 8472 factions, including assimilated vessels with combined team abilities from both the Borg and the original species' faction. A number of ship molds have been repeated from earlier Star Trek: Tactics games.

The IKS Toral is identified as the Duras sisters' Bird-of-Prey on its card.
A Borg cube was displayed in promotional images for Tactics III but was not released with the game. Oversized Borg cubes were released later with the Attack Wing game. 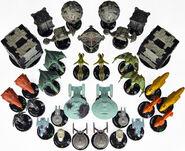 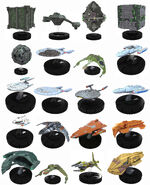 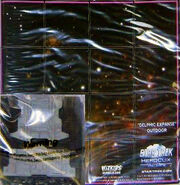 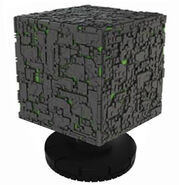 Borg cube promo
Add an image to this gallery

In October 2017, WizKids released a new game with thirty-two ships. An Organized Play Kit also premiered on the day of the game's release. The Xindi faction was introduced in this game.

Most starship models in this set feature a metallic paint base coat while the "cloaked" vessels are made of a darker translucent plastic than previous Tactics releases. All of these sculpts were previously released in earlier iterations of this game, Attack Wing, or the Expeditions game.

Tactics IV starter set
Add an image to this gallery

A seven-figure Tactics expansion pack was released in August 2012. These figures were previously released in the Star Trek: Expeditions game with "Clix" bases.

A Tactics "mini-game" was released in April 2013 which included two figures.

Retrieved from "https://memory-alpha.fandom.com/wiki/Star_Trek:_Tactics?oldid=2668633"
Community content is available under CC-BY-NC unless otherwise noted.