ISBN 9780760343593 (hardcover)
ISBN 9782258103801 (French)
ISBN 9780760349212 (paperback)
Star Trek: The Complete Unauthorized History is an unofficial reference book published by Voyageur Press. Released in November 2012 in a hardcover edition, the book - which seeks to "synthesize the various retellings [of Star Trek's history] from differing points of view and produce a single volume history celebrating the entire franchise", [1] including the development of the fan following - is written by Robert Greenberger with sidebar contributions from Dave Galanter, Michael and Denise Okuda, Steve Roby, Howard Weinstein, Dayton Ward, and others. The book saw a reprint as a softcover paperback in October 2015 with unaltered cover artwork.

Publisher's description
This is the first book to combine an authoritative history of the Star Trek franchise – including all six television series and eleven feature films–with anecdotes about the show from those who helped shape it from the outside in: the fans. Star Trek expert Robert Greenberger covers everything from show creator Gene Roddenberry's initial plans for a series combining science-fiction and Western elements, the premiere of the original series in 1966, its cancellation, the franchise's return in an animated series, and its subsequent history on television and film, up to expectations for the 2013 J.J. Abrams film. Along the way, Greenberger analyzes Star Trek's unique cultural impact and tremendous cult following, including the famous (and first ever) save-the-show mail campaign. But this isn't a sugarcoated history; this book chronicles the missteps as well as the achievements of Roddenberry and others behind the franchise.

Approximately two dozen sidebars provide personal experiences of dedicated Trekkies who influenced or became a part of the franchise. Star Trek fandom is unparalleled in the effects it has had on the franchise itself. The book is illustrated with a large collection of photographs of memorabilia, many of which have never been seen before in print. 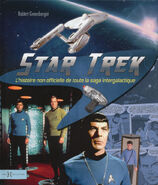