Star Trek: The Electronic Game was a tabletop electronic game for one or two players marketed by Coleco in 1980. The theme of the game is based on Star Trek: The Motion Picture, with the USS Enterprise battling against V'Ger for control of a rogue planet. The console itself was styled after the refit Enterprise seen in Star Trek: The Motion Picture. Gameplay consisted of either fending off your opponent's torpedo fire (in two-player mode) or shielding the planet from V'Ger's attacks (in one-player mode).

NOTE: There is some doubt as to whether or not this game was actually produced. It was advertised in Coleco's 1980 toy catalog but few, if any, actual game units exist. The Handheld Museum, an online source for hand-held game information, shows a prototype casing for the game and notes that a working model has not been seen by them. 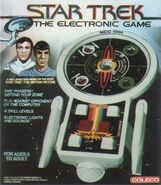 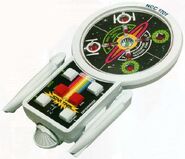