Star Trek: The Final Frontier is a board game produced for the UK market by BMI, a subsidiary of Toys & Games Limited in 1992. The game is for two to six players, and was produced in two versions. It is presumed that Version 1 (pictured in images 1 and 3 below, with the cruder graphics) was produced before Version 2 (as pictured in images 2 and 4 below), which is difficult to verify without owning both versions of the game, as they both have a 1992 copyright on them. However, upon closer examination, the main differences seem to be mainly cosmetic, focusing mainly on graphic changes to the various game components and fixing of spelling and reference errors. For example, references on game cards to "Romulons", "Ohora" and "Scottie" in V1 are corrected to "Romulans", "Uhura", and "Scotty" in V2. None of these changes alter gameplay in any notable way, so both editions of the game are functionally identical. 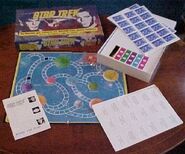 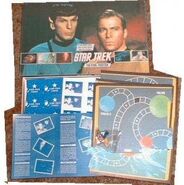 Version 2 game components
Add an image to this gallery

† In V2, these pieces are replaced by "6 Playing Pieces".

The object of the game is to reach four assigned destination planets and return to Earth before your opponents.

The game board (which is a four-piece board put together jigsaw puzzle style) depicts a "Solar Chart" with eleven planets (including Earth), ten of which are destinations the players must reach. Some of the planets are incorrectly named, such as "Klingon" instead of Qo'noS and "Ferengal" instead of Ferenginar. In addition, some of the planets and graphics featured in the game are from the TNG era, even though the game itself is supposed to be TOS-based. (Indeed, gameplay is very similar to the original Ideal Star Trek Game and the later Milton Bradley Star Trek: The Motion Picture-based Star Trek Game.)

Players choose a "ship" (in V1, a marker in one of six colors with the TNG combadge graphic and the legend "USS ENTERPRISE"; in V2 a standard plastic pawn) and place it on Earth on the game board. The "Mission Pack" Deck (aka the Destination Deck, with pictures of Kirk and Spock on the backs in both versions) is shuffled and four cards are dealt to each player (any duplicate cards are returned to the deck and re-drawn until each of the four cards have a different destination). Players then roll the six-sided die to determine play order and to move around the board.

Landing on a planet (not necessarily by exact count) that is on one of the player's destinations allows that player to discard the Mission Pack card with that planet's name. The player then needs to roll an odd number (1, 3 or 5) to "re-launch" their "ship" into the "spacelanes".

Landing on special spaces (those with a TNG combadge graphic in V1 or a five-pointed star in V2) requires the player to draw a card from the Star Trek Deck (In V1, cards having the TNG combadge graphic and the legend "USS ENTERPRISE" on the back; in V2, cards having a white five-pointed star and the legend "STAR TREK CARDS" on a blue background on the back) which may help or hinder their progress.

Landing on a black space (a "Black Hole") lets the player's left-hand opponent move you to any other "Black Hole" space on the board (thus acting more like wormholes than Black Holes), which again may help or hinder the player in their game play.

Once a player has reached their fourth destination, they must return to Earth (this time by EXACT COUNT) to win the game.

Retrieved from "https://memory-alpha.fandom.com/wiki/Star_Trek:_The_Final_Frontier?oldid=2499944"
Community content is available under CC-BY-NC unless otherwise noted.