With the then-upcoming 50th anniversary of Star Trek, CBS Communications, as a courtesy to its sister company CBS Studios Inc. – owner of one of history's most successful media-franchises – owed it to its standing to have attention paid to the phenomenon, starting with the release of three Star Trek-themed issues in 2014-2015 in the Collector's Edition series, of which The Lost Photographs was the first. A glossy magazine, the publication was high on picture content, but with minimal, cursory text captions. Editorial chores were subcontracted to publisher Media Lab Books. The magazine was offered for official sale until 3 February 2015.

Media Lab Books decided to publish the title as an expanded paperback reference book, slated for release in the year of the anniversary, 2016, under the slightly differing title Star Trek: The Lost Photography. According to their publisher's blurb (quoted below), the title was already slated for an August 2015 release, but was apparently delayed for reasons not stated. As of December 2017, this title has yet to be released.

Publisher's blurb for magazine release
CBS is proud to announce the official Star Trek: The Lost Photos, a one-of-a-kind collector's edition celebrating the original series. An exclusive look at the most popular sci-fi show in history, this 100-page, glossy commemorative issue will tell the story of how Star Trek came to be, and includes never-before-seen photos from the series' creation. It's a must-own for any fan of Gene Roddenberry's incredible universe.

Publisher's blurb for paperback release
CBS celebrates one of the most popular science fiction shows of all time with Star Trek: The Lost Photographs. This 144-page, commemorative soft cover book will tell the story of how Star Trek came to be and reveal how it captivated the world. Told through exclusive photos, interviews, behind-the-scenes shots and rare content, The Lost Photographs is a must-own for any Trekkie. Featuring a special section dedicated to the memory of the late Leonard Nimoy, the man forever known as Mr. Spock. Just in time for the 50th anniversary celebration of Gene Roddenberry's world-shaking, sci-fi franchise, this definitive guide to Star Trek will arrive in stores nationwide on August 4, 2015. 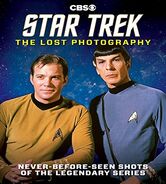