The Great Bird of the Galaxy writes a Star Trek novel!

From the book jacket
The writer-producer who created Mr. Spock and all the other Star Trek characters – who invented the starship Enterprise, who gave the show its look, its ideals – puts it all together again here in his first Star Trek novel!

Their first five-year mission is over. Kirk, Spock, McCoy, Scotty, all the crew have scattered to other jobs or other lives. Now they are together again on a fabulously refitted USS Enterprise as an incredibly destructive power threatens Earth and the Human race.

From the Australian edition's book jacket
It came from an unexpected quarter of the galaxy.

It ignored all attempts to communicate with it.

And it annihilated all opposition with energy bolts of unimaginable ferocity.

Computer projections showed that it would enter the solar system in precisely three days.

The USS Enterprise, refitting in dry dock, was the only craft that Starfleet Command could send to intercept the Cloud in time…

Admiral James Kirk, on a break from the Admiralty, relaxes in Africa at the world famous museum city, Alexandria. He slowly begins to receive a signal from Starfleet Command through a senceiver implant in his brain. The information plays out in his mind, of Klingon K't'inga-class cruisers destroyed by a powerful cloud in space heading towards Earth. Meanwhile on Vulcan, Spock kneels before the Vulcan masters on Gol. He is about to achieve kolinahr, when a powerful consciousness touches his mind. Spock telepathically senses Kirk's thoughts of the attack on the Klingons. After a mind meld, the Vulcan Master T'Sai sends Spock away without achieving kolinahr.

Kirk contacts his associate, Vice Admiral Lori Ciana, whom he has been involved with for the two-and-a-half years since the end of the Enterprise mission. She informs him that Admiral Heihachiro Nogura plans to launch the Enterprise to intercept the cloud. Kirk goes to Starfleet headquarters and convinces Nogura to hand command of the Enterprise over to him.

Once aboard the Enterprise, Kirk informs Captain Will Decker that he is assuming command. Decker is unhappy with the decision, but remains aboard as first officer. Suddenly, disaster strikes when the transporter malfunctions. Admiral Ciana and the Vulcan science officer Sonak are both killed. Later on the rec deck, Kirk briefs the crew on the cloud. Unexpectedly, the crew witnesses the destruction of Epsilon IX at the hands of that same cloud as the event occurs.

After the transporter is repaired, new crew members beam aboard. Lieutenant Ilia, a Deltan and former lover of Decker, takes the navigator position. Then Leonard McCoy beams aboard, after being drafted back into service by Kirk. He resumes his position as CMO.

With the crew finally together, the Enterprise leaves orbital dock. Once the ship's engages warp drive, a wormhole appears. The Enterprise is trapped inside, on a collision course with an asteroid. Torpedoes are fired and the asteroid is destroyed, freeing the ship. However, the warp engines are down.

A shuttle docks with the Enterprise. The crew is shocked to find Spock has come aboard. Spock immediately gets to work on fixing the engines, and the Enterprise warps towards interception with the cloud. Spock reveals he has been in mental contact with the cloud and senses perfect logic.

The Enterprise enters the cloud. Sensors detect an object at the cloud's center. Kirk risks a scan, and the cloud responds by sending a green energy probe to the bridge. It begins scanning the computer. A security officer attempts to stop it, but the probe lashes out at him and he vanishes. Spock intervenes when it attempts to scan his console, to prevent it from learning Earth's defenses. The probe attacks Spock, but Ilia interferes. She too vanishes, and the probe with her.

A tractor beam pulls the Enterprise inside the object at the center of the cloud. Once inside, the "intruder alert" alarm sounds. Inside Ilia's quarters, a probe identical to her in appearance is found claiming to be sent by Vejur to observe the carbon based units infecting Enterprise. She explains that Vejur is heading towards Earth to find the "Creator" and join with him. Kirk assigns Decker the task of learning as much information from the Ilia-probe as possible.

Spock secretly leaves the ship in a spacesuit, intent on mind melding with Vejur. He passes through an elaborate gallery of Vejur's journey, seeing stars and entire planets. After finding a sensor and melding with it, Spock discovers Vejur's journey began at a planet of living machines, and concludes that the entire vessel is a lifeform. Vejur is the ship itself. Vejur senses Spock's presence, and Spock is injured during the meld. Kirk, now in a spacesuit, leaves the ship to find Spock, when the Ilia-probe reveals Vejur is sending Spock back to the Enterprise. There, Spock reveals Vejur has accumulated vast knowledge, but without the ability to feel that knowledge was useless, leaving Vejur without the answers it needs. 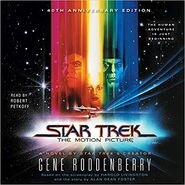 Lori Ciana (β)
A Starfleet vice admiral in 2272 assigned as Rear Admiral James T. Kirk's commanding officer in his post as chief of Starfleet Operations (as well as his ex-lover, for some of the two-and-a-half years since he relinquished captaincy). She died in a transporter accident along with Commander Sonak when they were attempting to board the Enterprise.

The character who died on the transporter was seen in the movie, but no reference was made to her rank or status. In Roddenberry's draft, she was being sent by Nogura to temper Kirk's enthusiasm for starship command – a role that ended up being performed by McCoy.

Called Perez in the movie.

Mediterranean Alliance
A political unit in southern Europe located in the Mediterranean region and encompassing at least one former nation-state, Gibraltar, during the 2270s. Admiral Kirk was contacted by Starfleet during an excursion to Gibraltar, which is noted to be a member of this alliance.

Gibraltar hydroelectric complex
In the twenty-first century, The Mediterranean Alliance built a dam across the strait of Gibraltar. This lowered the Mediterranean Sea by 60 meters, creating vast amounts of new land for farming and other uses, and enough hydroelectric power to supply all of southern Europe, and north Africa. It also exposed pre-Minoan ruins, and the Library of Alexandria.

Mind Control Revolts
In the early-21st century, behavior-control implants were politicized in some parts of the world, and this lead to violent revolts beginning in 2043 and ending four years later. Mind-control technology was abandoned on Earth following these revolts.

New Humans
In the early-23rd century, society was evolving to a point where large numbers of "New Humans", telepathically linked as a group mind, represented a sizable portion of Human society. Although more intelligent than normal humans, these people proved incapable of deep space exploration, lacking the ability to bear encounters with more advanced beings than themselves – for all their intelligence, aloofness was a hindrance to them.

Alien Moon Base
In an apparent homage to 2001: A Space Odyssey, a passing mention is made to the past discovery that an unknown race of "space voyagers" had used the Earth's moon as a base and conducted some manner of genetic experiments on human ancestors a million or more years previous.

This term, originated in Roddenberry's work, was used in several later novels by different authors.

1999
Voyager VI falls into a black hole and contact is lost.
2043–2047
Mind Control Revolts
2270
Five-year mission ends. Kirk is promoted to admiral. Spock and McCoy leave Starfleet.
2272
The events of this novel.