ISBN 1789091993
Star Trek: The Motion Picture - The Art and Visual Effects is an officially licensed reference book from Titan Books. Initially scheduled for a May 2020 release in order to celebrate the 40th anniversary of Star Trek: The Motion Picture, its release was postponed due to the 2020 COVID-19 pandemic to firstly 7 July 2020, and subsequently pushed back further to 1 September 2020.

from the interior dust jacket
Forty years ago, Star Trek: The Motion Picture brought Kirk, Spock, and the Enterprise crew to the big screen and changed the course of the Star Trek franchise. Celebrate this landmark anniversary by discovering the visual artistry that made this an enduring science fiction classic. For the first time ever, explore archival material created by legendary Star Trek collaborators, including Robert Abel, Syd Mead, Ralph McQuarrie, Andrew Probert, and Ken Adams. 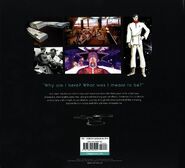 Retrieved from "https://memory-alpha.fandom.com/wiki/Star_Trek:_The_Motion_Picture_-_The_Art_and_Visual_Effects?oldid=2763080"
Community content is available under CC-BY-NC unless otherwise noted.