Star Trek: The Next Generation (Blu-ray)

Star Trek: The Next Generation was remastered from the original camera negatives for release on Blu-ray, beginning in 2012 with a "sampler disc" of three episodes. Complete season sets were later released – beginning with the first season in July 2012 – at a planned schedule of two season releases per year through 2015. [1]

Apart from the restored episodes, many of which with originally edited out footage reinserted, resulting in extended episodes, the Blu-ray releases also contained all the special features (albeit un-restored in standard definition – SD), originally included in the DVD releases, supplemented by newly produced ones in high definition (HD). The new special features were directed and produced by Roger Lay, Jr. and Robert Meyer Burnett, who introduced the term "value added material" (VAM) for these as an alternative designation.

In April 2013 a start was made with the release of feature length two-part episode single-discs. It was with the release of the first one, "The Best of Both Worlds", that it became evident that these issues would contain newly made special features, that were not to be included in the regular boxed season releases, much to the dismay of fans. Director and editor of this material for the Blu-ray releases, Burnett, has justified the decision as follows,

"On both TNG and ENTERPRISE, Roger and I have stretched our budgets far, FAR beyond what they can accommodate in terms of content. Frankly, because we're fanatics, we're basically taking dollars out of our own pockets to create more and better VAM. As far as TNGS3 was concerned, I just DECIDED to make the documentary 90 minutes instead of 60. I asked Roger and he agreed. Ira Behr's interview was so compelling, and he only worked one season on TNG, we both felt we had to use as much of it as we could, so we needed that extra 30 minutes. But what people must understand is...each MINUTE of VAM has a dollar value associated with. There's only a finite amount of money budgeted for each title. There simply isn't any more. We're given a set budget for each season and are expected to work within that budget. To go over is unprofessional in the extreme. And if you read between the lines, you can see CBS has gone way, WAY above and beyond to accommodate the VAM. Way, WAY beyond... "Now... when the decision was made to create the BEST OF BOTH WORLDS Movie for the Fathom Event, and then CBS wisely decided to make that a stand-alone release available to hopefully attract new customers, suddenly there's a new budget, and money allocated to create a product which didn't previously exist. So Roger and I jump all over that and CBS gave us a budget which allowed us to create a new commentary and half-hour documentary which wouldn't otherwise exist. Which adds to the overall value of the single-disc BEST OF BOTH WORLDS movie. Fans need to understand nothing was taken away from the individual season discs...because the BOBW doc wasn't a part of that. Our Season Three VAM is absolutely the best we could have possibly done with our budget. CBS could have decided to release a vanilla BOBW disc, but we're like... HEY! WAIT A MINUTE! Can we do some more VAM? To CBS's credit, they agreed... but I'm sure someone was thinking..., "Those fuckin' guys... don't they ever stop?" Well... no... we don't." [2]

To aggravate matters, for fans at least, CBS made the decision, prior to the release of TNG Season 3 Blu-ray, to employ the so-called "retailer exclusive" format. The format entailed that preferred retailers, most notably the chain store Best Buy, would receive BluRay versions that contained special features, not included on the regular release, something that flew straight in the face of CBS' express promise at the start of the project, that customers would receive all available material on their purchases. Indeed, the format was employed with the release of the third season, when the fifteen-minute visual effects special "The Trek Not Taken" was not included on the regular release, but only available to customers at Best Buy. Not only this, but the format was extended to the ENT Season 1 Blu-ray release of Star Trek: Enterprise, which ran concurrently with that of The Next Generation, as well. Partner website TrekCore.com has reported that the format did not apply to the German releases, though the geo-restricted "The Trek Not Taken"-special had to be downloaded separately by customers of TNG Season 4 Blu-ray at the German CBS Star Trek website, as was required with the Enterprise-special. To add insult to injury, neither special was ever made available to customers anywhere else in the world. It appears however, that CBS did not follow-up on this format at least, as these two releases are to date the only ones where the format was applied. The feature-length releases though, continued to include exclusive special features, meaning fans still had to "double-dip" if they wanted these as well. [3]

Aside from these issues, fans were also disappointed that – again flying in the face of CBS' express promise – not all previously available aired and home media special features were included on the remastered releases, which included several The Next Generation specials aired in the late 1980s by the Paramount Television produced current media affairs show Entertainment Tonight, but most notably those included on the additional disc of the 2007 TNG Complete Series DVD Boxset. [4]

In explaining why it was unlikely that either Star Trek: Deep Space Nine or Star Trek: Voyager would receive Blu-ray releases, the website TrekNews interviewed Robert Meyer Burnett, the creator of the special features for the set. He described the remastering process of The Next Generation, detailing the creation of the Blu-ray high-definition remasters involved a complicated rebuild of the entire show from the ground-up in high-definition, something which had never been done before. The process meant that all episodes of the show went through a new post-production process at a cost of over 12 million dollars, which included tracking down all original negatives, a complete re-scanning, full 7.1 DTS sound remastering and the creation of new CGI effects. Burnett further explained that both Deep Space Nine and Voyager would be further complicated by their extremely heavy use of CGI, which would necessitate the re-creation of all digital assets from scratch at extreme cost, due to Paramount's failure to maintain ownership of these elements. [5]

Despite the initial enthusiasm, [6] resulting in promising sales at first, [7] the reception of fans to the The Next Generation blu-ray releases was ultimately lukewarm, due to the discs being released at the same time the use of cheaper HD streaming media – which were the relatively few ones predominantly purchasing the rights, instead of them being sold more profitably in syndication to the more ubiquitous traditional broadcasters – began skyrocketing in popularity. Additionally, with customers worldwide still dealing with the after-effects of the severe financial crisis of 2007–2008, the high price-point became for many an issue of note as well, only aggravated by the near concurrent, but equally high-priced Star Trek: Enterprise Blu-ray releases, despite the far lower production costs for those releases due to the way that series was originally produced – very little remastering had been necessary for the Blu-ray releases as Enterprise was the first Star Trek live-action production entirely produced digitally in High Definition, explaining the very rapid succession in which their season boxes were released.

Furthermore, fans harbored additional resentment on top of the "VAM controversy" (also an issue for Enterprise), as they were wary of purchasing the series in yet another format following releases on VHS, LaserDisc and DVD – something customers themselves refer to as "double-dipping", and which held especially true for the most recent of the Star Trek series, Enterprise, having seen relatively recent releases on DVD, and even on VHS in Europe's case (see also "Home media format franchise" in this regard). [8] In this, the high production value of Enterprise has actually acted against its Blu-ray releases as well, as picture quality on the DVD iterations was perceived to have vastly improved, especially by those customers who did not own an at the time still expensive HD television set yet (see also main article in this regard).

Note: the Region B covers concern the German "Limited Steelbook Editions" (see below); the regular Region B releases were, apart from the foreign-language text imprints, identical in packaging to the Region A ones.

The German "steelbook" Blu-ray release included a special collectible pin with each set. After the release of all seven seasons, purchasers could enter special codes at the German Star Trek website to receive a free case for the collection. [9](X) The initial release of the Season 1 set had the included pin in a small plastic bag, which allowed the metal pin to damage the front of the steelbook case. Buyers were able to request a replacement case through the German Star Trek website, [10](X) and future releases were changed to include the pin in a small box. The seven seasons also featured spanning spine artwork when shelved together.

The German season releases came in two variants, the in plastic encased regular editions, similar to the ones as released elsewhere, and as the simultaneously released "Limited Steelbook Edition" variant – a format particularly popular in Germany – , retailed exclusively through the German Amazon.de and each season packaged in a transparent acrylic slipcase. [11] [12] The different spine artwork notwithstanding, the contents of the latter were the same of the regular one, though the metal pins were in this case issued in small jewelry boxes instead of plastic bags after the issue with season 1.

Alongside Japan and French-Canada, Germany became one of only three non-English speaking regions to issue the "special releases" as well, but in this case only in the regular format. 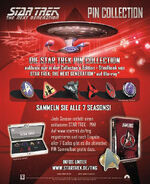 An ad for the pin collection 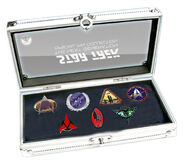 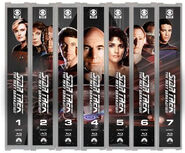