Star Trek: The Next Generation (pinball)

The Star Trek: The Next Generation pinball machine was a pinball game created by Williams Electronic Games in 1993. A wide-body machine, the game prominently featured the USS Enterprise-D as well as original recordings from the eight main cast members of the TNG series.

Although the general aim of the game was to score as many points as possible, the machine featured a complex array of ramps, bumpers, and drops which allowed the player to complete a series of missions provided by the game.

One of the unique features of the Next Generation machine was the presence of two ball launchers mounted on either side of the playfield. These allowed an alternative method of feeding the ball into the playfield, and were used in some of the missions.

The mechanism that allowed the machine to feed balls to the launchers and other locations, developed for this table, was patented by Williams in the US as #5,350,174, granted on 27 September 1994. The launchers themselves were the subject of an earlier patent, #5,186,462.

Ball locking was a feature of the game, as with most pinball machines. As additional balls were locked, a storyline involving the large Rogue Borg ship mounted on the playfield advanced. Once three balls had been locked, the game entered multiball mode. In multiball mode, the left launcher is used to hit the Neutral Zone drop and award jackpot values. Once the drop is hit three times, or after the first miss, the three locked balls are returned to the playfield. The player must destroy the Borg ship by hitting the jackpot targets (the Start Mission drop and the Delta Quadrant ramp), before the Enterprise's shields are drained, and the Start Mission drop stops awarding jackpots. The spinner is used to "regenerate" the shields and reactivate the jackpot.

A Ferenigi Freighter is disabled in the Neutral Zone and needs a supply of duranium spheres for repairs. The player can earn up to five balls in this multiball mode and each sphere in play earns 5 million points up to a maximum of 25 million points which is earned by sinking the ball into the Jackpot pocket underneath the Borg ship. The mode begins by launching a ball from the right canon into the Neutral Zone targets to prepare the balls for multiball. The mode ends when all but one ball is no longer in play, or after 25 seconds, whichever comes first.

Three Romulan warbirds are conducting military exercises in the Neutral Zone. Picard orders that a warning shot be fired on the ships, which is done by shooting the ball at the lit targets at the left orbit, Alpha Quadrant ramp and Beta Quadrant ramp. When one of these lit targets are hit, the warbird is forced to cloak for ten seconds before uncloaking, awarding 10 million points. Hitting the right hand "Klingon Assistance" targets allows a Klingon Bird of Prey to decloak and occupy the space the Romulan ship was taking, thus removing that warbird from the encounter. When all three Romulan ships have cloaked within 30 seconds, the player earns 30 million points.

A Cardassian warship appears and attacks the Enterprise without warning. Hitting the Neutral Zone targets in this two-ball multiball mode, allows the Enterprise to return phaser fire on the Cardassian ship and awards points based on the shield strength of the Enterprise, between 5 and 50 million points. The warship will occasionally fire on the Enterprise, reducing the ship's shields and the points award. Just like the Borg Multiball above, the spinner recharges the shields and the value of the jackpot award. The mode ends when one of the balls is no longer in play.

Missions are displayed on the playfield around the periphery of the Enterprise saucer section. Only one is lit at a time - hitting the Q target bumper changes which mission is lit, and the mission can be started by hitting the Start Mission drop. A mission can also be selected by hitting the Command Decision drop. Completing mission objectives earns one of four Artifacts: Singing Stone, Isolinear Chip, Duranium Sphere, and Dilithium Crystal. Each Artifact can be collected more than once.

Search The Galaxy
The player must hit the 'Quadrant' ramps in order to complete the mission. Hitting any three ramps earns an Artifact. Hitting all three and the Neutral Zone drop, in the order given by Riker, earns a second Artifact.

Battle Simulation
The player must use the launchers to hit either the Neutral Zone or the Warp Speed drops. A 20-second timer is used to With the first miss, the ball returns to normal play, but the drops may still be hit to continue the mission. Each successful hit advances the simulation to the next level, with level six being the highest. The player can only attempt to complete level six if he or she is able to complete the shots without missing. Completing Level Five earns an Artifact whereas completing Level Six earns an Extra Ball.

Q's Challenge
The player must hit the lit targets. Each target hit earns a cumulative award of ten million points, up to a maximum of 100 million points per hit. Hitting the Q target lights another target. Each lit target will time-out after fifteen seconds. The mission ends when all targets have timed-out. Hitting five targets earns an Artifact.

Rescue
There are 50 Starfleet personnel that must be rescued by the player either by transporter or shuttlecraft. Hitting the spinner, targets, or the Borg jackpot bumpers adds personnel to the shuttle. The 'Alpha Quadrant' and 'Beta Quadrant' ramps launch the shuttle with whatever personnel is on board. An Artifact is awarded when 25 personnel have boarded the shuttle, transported out, or a combination of the two. When the remaining personnel are ready to be extracted, the computer will alert the player. When all 50 personnel are rescued, a second Artifact will be awarded.

The player must first destroy the incoming asteroid by shooting the centre pocket. At the start the award for this mission starts at 20 million which decreases every second the asteroid is in tact down to a minimum of five million. When the player successfully destroys the first asteroid, the point value stays at whatever the player has locked and all remaining targets are lit. Destroying five asteroids (including the first one) earns an Artifact where destroying all the asteroids scores 50 million points, regardless of the point value that was captured from the beginning; and a second Artifact.

Once all seven missions have been completed, an additional mission commences:

The Final Frontier
A six-ball multiball mode (four from the multiball holders, two in the launchers), the mission begins with awarding bonuses for each Artifact earned, with one billion points earned for each complete sets of four. Shots made during the mode are awarded points based on the number of Artifacts earned, up to 250 million per shot. This is considered the game's "Wizard Mode". 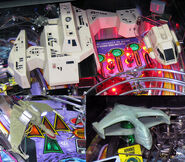 Close-ups of the Rogue Borg ship and other starships

On 1 June 2012, FarSight Studios announced that, as part of their Kickstarter project to digitize Williams' The Twilight Zone machine for their Pinball Arcade app, they would seek funds to purchase the license to the Next Generation table as a "stretch goal". [1] Although the target donation amount was not achieved in the allotted time, the response to the announcement resulted in FarSight launching a second Kickstarter on 17 August 2012, solely for the Next Generation table. US$45,000 was the initial target, to cover the remaining fees required. At the end of the project, US$52,137 had been donated. [2]

The virtual reconstruction of the table was released to iOS, Android, and Mac OSX on 21 December 2012.