Star Trek: The Next Generation – On Board the USS Enterprise is a reference book written by Michael and Denise Okuda.

Publisher's description
Star Trek fans – or Trekkies – have been collecting Star Trek souvenirs, artifacts, and memorabilia for many years, and they'll be thrilled with this brand-new book and CD-ROM package. Scheduled for publication in time to coincide with release of the latest Star Trek movie, as well as the 25th anniversary of Star Trek: The Next Generation's TV debut, this amazing book delights fans with –

Enclosed with the book is a fabulous CD-ROM that gives viewers a detailed tour of the Enterprise. This remarkable software program was developed in close cooperation with the creators of the Star Trek sets that were used in the films and on the television series. On Board the U.S.S. Enterprise offers Trekkies a once-in-a-lifetime ticket to one of the most popular and beloved sci-fi adventures of all time. 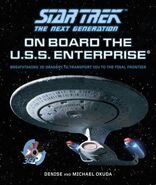 Carlton Books cover
Add an image to this gallery
Retrieved from "https://memory-alpha.fandom.com/wiki/Star_Trek:_The_Next_Generation_-_On_Board_the_USS_Enterprise?oldid=2523787"
Community content is available under CC-BY-NC unless otherwise noted.