Star Trek: The Next Generation – The Full Journey is the second offering in the "Full Journey" re-releases of the Star Trek television series. The Region 2-only DVD box set is essentially a repackaging of Star Trek: The Next Generation as marketed in the previous complete box set edition, including the extra disc containing the additional extra features. While the German release was initially an Amazon.de "retailer exclusive", it was reissued a year later as an otherwise identical, regular release.

The box set was re-released in the UK in 2014 with the same contents in different packaging. The 2011 release contained all of the discs in fold-out cardboard cases with slots for each disc, whereas the 2014 release housed all the discs across three large plastic Amaray cases. A similar German re-release followed suit in February 2015, though it now sported the German sub-title "Die komplette Serie" ("The Complete Series"), contrary to the English title on its original release and its in the same year released Blu-ray counterpart. 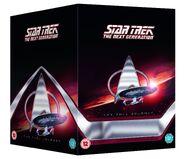 2015 German re-release cover
Add an image to this gallery

For the contents see TNG Complete Series Boxset. Remarkably, the extra special features bonus disc was not issued with the Blu-ray counterpart of this collection, nor has it with the previous Region 4 and later Region 1 versions of the Star Trek: The Next Generation - The Complete Series DVD collection releases for that matter, though it was again included for the Danish Region 2 version – being essentially the Danish The Full Journey re-release.

Retrieved from "https://memory-alpha.fandom.com/wiki/Star_Trek:_The_Next_Generation_-_The_Full_Journey_(DVD)?oldid=2378248"
Community content is available under CC-BY-NC unless otherwise noted.