Star Trek: The Next Generation Build The USS Enterprise NCC-1701-D

Star Trek: The Next Generation Build The USS Enterprise NCC-1701-D

Available by subscription from Eaglemoss Collections' websites [3] and published under its Hero Collector imprint, collectors can build their own seventy centimeter-long (~27.5 inch-long) replica of the USS Enterprise NCC-1701-D, constructed from hand-painted ABS and die-cast metal parts, and featuring electronic lighting.

Each four-week period, subscribers typically receive four kit "stages" with parts for the model and a (220 × 284 mm) 32-page magazine containing the relevant sections of the assembly instructions.

Special Issues featuring art prints and die-cast shuttlecraft models are also in production for the line.

The 1:916-scale model was designed as an amalgam of a number of the USS Enterprise-D studio models that appeared in TNG episodes and on film.

The assembled Galaxy-class model can be displayed in saucer separation mode with fully illuminated lighting, allowing both the primary and secondary hulls to remain lit when displayed separately. Both nacelles contain independent lighting units and are also powered by AAA battery packs.

Kit parts are designed to easily snap together and only a screwdriver, included with the first issue, is required for (some) assembly.

Simon Hugo, a contributing author to the project, added that the magazines include "a complete TNG episode guide, with behind-the-scenes insights, rare concept art, and whatever other interesting nuggets we can get our hands on. They’re really fun to research and write, and hopefully a lot of fun to read, too!" [2]

Ben Robinson, a veteran of the Star Trek Fact Files and a number of other popular Star Trek publications and partworks, is the senior project manager for this line.

Special Issues may be purchased (or declined) by subscribers and are exclusive to company web shops. Scheduled for the milestones listed below, they are slated to reoccur every three (standard) issues.

Limited Edition art prints include Certificates of Authenticity signed by the artist(s) and are produced in limited editions of 1,500 units each. The graphic for the first release measures 19.5 × 26.5 cm and is printed onto a 30 × 40 cm sheet of 310 gsm Hahnemühle German etching paper.

As Special Issues, models of the USS Enterprise-D's shuttles will also be manufactured in die-cast metal and ABS, sized similarly (120-140 mm) to the Standard Edition starships from the company's first starship collection. [3] [5]

In March 2021, the USS Enterprise 1701-D metal pin badge set was offered to retail by the company's US webshop.

Paid packs offered to subscribers. Larger scale that the ones from the official starships collection.

Subscribers who opt for a premium subscription will receive a LED-illuminated mirrored base for the model, measuring over two feet long, for a small additional ongoing fee.

Gift premiums are delivered to subscribers at specific subscription milestones. These intervals (and the products offered) vary in different countries.

Scans of magazine covers and art prints courtesy of Wixiban.com [4] and RetroTechRalph [5]

After the limited release of two test issues to retail in select areas of southern England, on 25 March 2019, the UK division of the company announced that the partwork had been suspended but stated that it hoped to resume publication "soon".

UK collectors who had purchased the test issues at retail were given the option of returning them for a full refund, [6] while UK subscriptions were not dispatched before the suspension of the partwork. This type of test release is a common practice for partwork publishers, in order to gauge consumer interest.

A second message was sent to UK subscribers on 9 May 2019, stating that the line was still suspended and that further upgrades would be made to the Enterprise-D model, adding that a "special gift" would be sent to early subscribers, if the partwork resumed. [7] Issues for US subscribers were ostensibly scheduled to ship in late March 2019 but did not reach customers.

In September 2019, Ben Robinson stated that the partwork would re-launch in "about a year", following further refinements to the model. [8] A retooled model (and a revamped magazine design) appeared on the partwork's US website in December 2020 and a 2021 relaunch date was announced.

This publication and its model are not directly related to De Agostini's similar (but short-lived) The Official Star Trek The Next Generation: Build the USS Enterprise NCC-1701-D partwork from 2011. The Japanese publication's model was executed at about the same scale as Eaglemoss/Hero Collector's but was an entirely different build that involved the participation of Rick Sternbach. 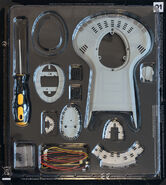 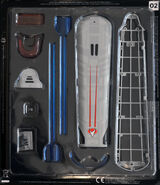