The Star Trek: The Next Generation Chess Game was a foreign (non-US) release chess game which was first produced in 1999 and has since been published by several more companies including Wood Expressions, Inc., Character Games Ltd., Crown & Andrews, and Really Useful Games.

Unlike the much more elaborate and considerably more costly Star Trek: The Next Generation Commemorative Chess Set by the Franklin Mint, this set utilized PVC chess pieces played on a standard cardboard chessboard.

Both sides' chess pieces consisted of crew members from the USS Enterprise-D as follows:

Each side's pieces have either black or gold bases, unique pawns, and one of two uniform styles.

The "black side" (with black bases in the shape of the TNG combadge) had characters who wore the standard TNG Starfleet uniform and had USS Enterprise-D pawns. The "gold side's" characters (with gold bases also in the shape of the TNG Combadge) wore the DS9 Starfleet uniform, as seen in Star Trek Generations. Its pawns appeared as the USS Enterprise-B which was also seen in the film.

Depending on where the set was released and which company released it, the artwork on the game box varied. Some covers simply showed a chess board and the Enterprise-D, others included a full TNG cast photo, while others showed images of the actual pieces and game board. Rarity variances between the boxes seem to be negligible, although the latter style (pictured above) appears to be more common. 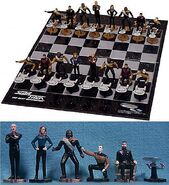