The Star Trek: The Next Generation Collector's Edition Monopoly game was produced by USAopoly. Released in 1998, it was the first of four Star Trek-themed Monopoly games that have been produced by the company.

The game played exactly the same as the original Monopoly game, but the elements of the game were all based on The Next Generation:

In addition, the game could also be played in conjunction with the other Trek Monopoly games USAopoly produced. However, this turned out to be just one other edition – the Star Trek Limited Edition Monopoly. (Planned editions based on Deep Space Nine and Voyager were mentioned in the rulebook, but never produced.) Though they are also Trek-related, neither of these two games are meant to be linked with the newer Star Trek Continuum Edition Monopoly or the Star Trek Klingon Edition Monopoly.

Game board and components 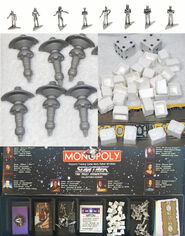 Game tokens
Add an image to this gallery

Retrieved from "https://memory-alpha.fandom.com/wiki/Star_Trek:_The_Next_Generation_Collector%27s_Edition_Monopoly?oldid=2225099"
Community content is available under CC-BY-NC unless otherwise noted.