The Star Trek Commemorative Checker Set was produced by The Franklin Mint in 1995, presumably around the same time as their release of the Star Trek: The Next Generation Commemorative Chess Set. Like its predecessor, this was meant to be a companion piece to the TNG chess set.

The set was sold in a special collector's case, along with its own square glass checker board that emulated the style of the TNG Chess Set's board. 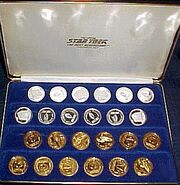 Pieces in Collector's Case
Add an image to this gallery

Retrieved from "https://memory-alpha.fandom.com/wiki/Star_Trek:_The_Next_Generation_Commemorative_Checker_Set?oldid=2529949"
Community content is available under CC-BY-NC unless otherwise noted.