16
Star Trek: The Official Busts Collection is a British partwork magazine and product line that was published by Eaglemoss Collections under its Hero Collector imprint and had been available in a number of countries worldwide.

Authorized and licensed by CBS Consumer Products, the series featured eleven to fifteen centimeter-tall hand-painted polyresin busts of a number of Star Trek characters, with a focus on Starfleet captains and other memorable roles. Ben Robinson served as the Collection's project manager

Each sixteen-page magazine (measuring 160 × 222 mm) contained "in-universe" biographical information about the character, behind-the-scenes accounts from the cast, company, and writers, and was illustrated with stills from Star Trek productions.

Debuting at New York Comic Con on 4 October 2018, the line was available through company webshops and other retailers. Essentially a do-over of Robinson's Star Trek: The Figurine Collection for GE Fabbri (one of Eaglemoss' two direct predecessors) from 2006, the Bust Collection fared little better than its progenitor as it too failed to generate sufficient retail sales for it to become a commercially viable product line. In August 2020 the Bust Collection was prematurely discontinued after the release of only twelve character busts. 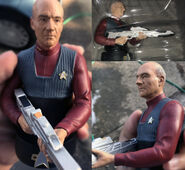