ISBN 9781681884219 (US)
ISBN 9781789093650 (UK)
Star Trek: The Official Guide to the Animated Series is a richly illustrated and officially licensed reference book, dealing with the making-of aspects of Star Trek: The Animated Series, its contents largely organized on a per episode basis. Released in September 2019 by Weldon Owen in North-America, the title was licensed to Titan Books for a by a month delayed release in the UK (and the rest of the EU).

Publisher's blurb
When the beloved and now iconic original Star Trek show was cancelled in 1969, and went into syndication, nobody was expecting how much fan support was out there for the Enterprise and its crew. As it became clear to CBS that there was a great appetite for further adventures, they debuted a Saturday morning cartoon that continued that epic five-year mission, with a number of episodes penned by science fiction notables.

The Star Trek Animated Show was produced by Gene Roddenberry and featured the voices of virtually every named star, including William Shatner, Leonard Nimoy, George Takei, Nichelle Nichols, and the rest of the crew in 22 animated episodes that are considered canon by Trekkies the world around.

This book is the first to document the animated series, each episode lovingly and authoritatively described by authors who had astonishing access to behind-the-scenes tales, original scripts, and the talent who made it all happen. 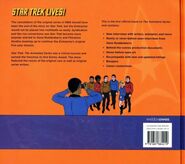 US edition back cover