The set was released in North America and in Europe the United Kingdom and Germany in September 2013, coinciding with the home video release of Star Trek Into Darkness. [1] Releases later took place in Australia in November 2013 and in Japan the following month in December. The German release was at first exclusively available at some supermarkets, though it later became available on Amazon.de in December 2014. [2]

While in some cases still being marketed as region-restricted, the releases are in actuality region-free as this has increasingly become commonplace for the Blu-ray format. [3]

This is the second (first Original Series release) Star Trek Blu-Ray release to have no DVD counterpart (the first was the Star Trek: The Next Generation - The Next Level‎ Blu-Ray in 2012). 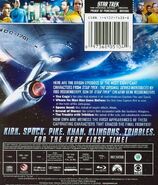