Star Trek: The Original Series – The Full Journey is a predominantly Region 2-only DVD box set release of remastered Star Trek: The Original Series in a new packaging format, containing all of the discs in fold-out cardboard cases with slots for each disc. While the German release was initially an Amazon.de "retailer exclusive", it was reissued a year later as an otherwise identical, regular release.

It is the first in the "Full Journey" re-releases of the Star Trek television series. An Australian Region 4 version has followed suit a few years later and features all of the individual slimline season releases placed on a card tray in a soft-board lid closed box.

The box set was re-released in the UK in 2014 with the same contents in different packaging, now with all the discs housed across three large plastic Amaray cases. This release was in 2016 followed by an identical Italian one, save for the language text imprints. A similar German re-release had preceded the Italian one in February 2015, though it now sported the German sub-title "Die komplette Serie" ("The Complete Series"), contrary to the English title on its original release and its in the same year released Blu-ray counterpart. Other Region 2 territories, as did other regions for that matter, preferred in the same era to re-release The Original Series DVD collection under the newly conceived Star Trek: The Original Series - The Complete Series moniker, featuring cover art not in any way related to that of The Full Journey.

The contents of the box 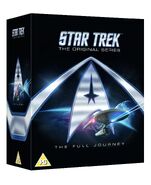 2015 German re-release cover
Add an image to this gallery

The episodes on the discs, and their arrangement among them, are identical to the individual Original Series Region 2 season sets. Please refer to the following entries for the discs' episode and special features arrangement,

Still missing though, remain the "Red Shirt Logs" hidden mini-featurettes, and Mike and Denise Okuda's episode text commentaries, not ported over from the original DVD releases.

Retrieved from "https://memory-alpha.fandom.com/wiki/Star_Trek:_The_Original_Series_-_The_Full_Journey_(DVD)?oldid=2378249"
Community content is available under CC-BY-NC unless otherwise noted.