This article provides an overview of FASA's Star Trek: The Role Playing Game, its associated components, supplements and reference works which were produced by FASA and, where the gaming miniatures were concerned, a small number of related gaming companies. 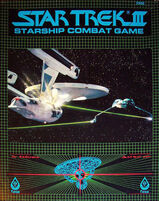 2008
The Orions: Book of Common Knowledge

2008
The Orions: Book of Deep Knowledge

2202
Witness for the Defense

2211
A Matter of Priorities

2227
Star Trek: The Next Generation First Year Sourcebook
Add an image to this gallery

5004
Struggle for the Throne

5005
Starship Duel II
Add an image to this gallery

When FASA released the Starship Combat Simulator (No. 2003) in 1983, which was re-released in 1985 and added as an extra component in the deluxe edition of Star Trek the Role Playing Game (No. 2001) of 1983, they simultaneously released, during 1983 and 1984, a line of starship gaming miniatures to give the game, which was standard equipped with carton playing tokens, an extra dimension. They could also be used in the later-released Star Trek III Starship Combat Game (No. 2006). The miniatures, which had a stated scale of 1/3900, were made out of pewter (a lead-tin alloy in a 60%-40% ratio respectively, according to sculptor Ab Mobasher) and packaged in a transparent bubble attached to a card (blister pack). They came unpainted and most of them required a certain amount of constructing with the aid of superglue. The 1983 edition also came with transparent plastic hexagonal stands, on which the miniatures were to be mounted, and which fitted the hex grid maps accompanying the Combat Simulator. They were colored to denominate the major factions in the game, blue for the Federation, red for the Klingon Empire, purple for the Romulan Star Empire, green for the Gorn Hegemony and neutral for the Orion Syndicate. Apart for the then-known canon ships, the range was expanded with non-canon ships as earlier designed by the FASA staff.

Though not the first to release starship gaming miniatures (that distinction fell to Task Force Games, who likewise produced miniatures for their Star Fleet Battles game), the quality and imaginative designs of canon and non-canon ships alike made FASA's miniature line the most popular item of the whole FASA Star Trek product range (as well as the most popular gaming miniature line), becoming highly sought-after collectibles in their own right amongst non-gaming Star Trek fans as well. Remarkably, most of the 1983-1984 releases were issued with ISBN numbers, something normally only given to print materials.

FASA reissued the line twice, once in 1985 and once in 1988, each issue expanding the line with further additions. The color coding of the stands was abandoned with the first reissue as all models were from then on accompanied by neutral transparent plastic stands. Each release had its own distinctive design style of the cards on which the models were mounted. Contrary to the first issue release which did ("The Trouble with Tribbles" for the Original Series-era ships, and Star Trek II: The Wrath of Khan and Star Trek III: The Search for Spock for the film-era ships), these two reissues did not sport imagery from the live-action productions on the cards, but rather non-descript redesigned card imagery.

In 1985 FASA sub-licensed the UK-based Citadel Miniatures to manufacture the miniatures for the UK market. Apart from being mounted on different style cards, the models differed from their US counterparts in that for many models less construction was needed and that they were more detailed, due to the fact that the pewter had a higher tin content. Although that made the metal more brittle, it also made the metal harder than their relative soft US counterparts and thus more susceptible to retain detailing. Eventually, Citadel released fourteen out of the eventual thirty-four models FASA produced (in essence following their numbering, which explains the gaps in Citadel's numbering), when the latter lost its license in 1989.

Apart from the ship models, FASA also produced 17 small pewter crew members figurines in 1983 as gaming pieces (one release only). Testament to the popularity of the starship miniatures was the fact that the sculptor of the first 22 starship pieces, Abbas Mobasher, received an H.G. Wells Award from the Academy of Adventure Gaming Arts and Design in 1985 for his work in the category "Best Vehicular or Accessory Series" [1], whereas FASA itself had received the award the year previously in the category "Best Vehicular Miniatures Series". Mobasher's successors for the expansions, Randy Hoffa and Steve Apolloni, received the same award Mobasher did, in 1987. FASA had their miniatures of the 1983/84 issues manufactured by Ral Partha Enterprises, while their 1985-1988 issues were manufactured by the Canadian company RAFM Miniatures and Games.

The popularity of FASA's Star Trek gaming models attracted the attention of Rawcliffe, who also began to release Star Trek miniatures in 1988, the same year FASA released its second reissue. Sub-licensed by FASA, Rawcliffe started to release high-quality solid pewter gaming pieces with the stand now as an integral part of the model. Thirteen of FASA's models were re-made as Rawcliffe's "SS" (Star Ship) series. FASA was mentioned as co-licensee both on the clear plastic packaging boxes and on the bottom of the stand, while simultaneously following FASA's numbering.

When FASA lost its license in 1989, Rawcliffe renegotiated a separate license with the Paramount Marketing and Licensing Department and acquired the molds for the models from FASA. FASA had geared up to add Star Trek: The Next Generation figures into their product line, but it was Rawcliffe that eventually released these in 1992 after FASA was unable to. These former FASA miniatures became the basis for Rawcliffe to include larger scaled starships, figurines, key-chains, and sculptures in their product line.

In 1991 Rawcliffe started anew with their "RF" (simply standing for "Rawcliffe") series (now including, besides figurines, larger scaled ship models without the FASA pedigree as well), but as per their new license agreement, only produced canon ships. This meant that the five non-canon ships they had released in their original "SS" series (SS2508, 25010, 2513, 2516 & 2529) were not reissued, resulting in they becoming sought-after rarities by collectors afterwards. With all references to FASA and their gaming miniature origins dropped – though in most cases retaining their hexagonal shaped stands – , the models were packaged in Rawcliffe's blank white carton boxes which stated only Rawcliffe's name. The models in this series came accompanied by a small colored carton nameplate which emphasized that they were released as decorative display items.

The appeal of FASA's 1/3900 scale gaming miniatures did not end when FASA and Rawcliffe lost their licenses. In the decades after official production had stopped small, non-licensed, amateur "Garage" model kit companies like Impulse Models, FMX Models, Macro Trek, and UK-based Future Legend continued to produce FASA-like miniatures, typically in resin. In most cases relatively short-lived, they often expanded on FASA's line with canon and non-canon ships of the later Star Trek productions. Particularly noteworthy was Future Legend, in business around the turn of the millennium, who not only expanded the line with canon ships, but also released FASA designs (in resin as well as in pewter), which FASA itself never got around of releasing.

Retrieved from "https://memory-alpha.fandom.com/wiki/Star_Trek:_The_Role_Playing_Game?oldid=2520009"
Community content is available under CC-BY-NC unless otherwise noted.