StarTrek.com provided an update on The Visual Dictionary on 3 January 2013, that it would make use of "rarely seen material from the CBS archives."[1] StarTrek.com released an exclusive look at two additional pages on 15 February 2013.[2]

Publisher's description
Boldly go where no Trekkie has gone before. "Star Trek the Visual Dictionary" is the final frontier. Charting each and every one of the the voyages of the starship Enterprise. Its mission: to explore everything Star Trek, strange new worlds (and old ones), to seek out every character, ship and series, to boldly go where no book has gone before.

Covering all of the six television series, with full coverage of favorite characters such as Spock, Bones, Scotty and Uhura, and full-color pictures of ships that would make James T. Kirk proud, this is the ultimate guide to "Star Trek" for any Trekkie. Don't be a Vulcan – live long and prosper with "Star Trek the Visual Dictionary".

Though first published more than three years after the release of Star Trek, the book does not acknowledge any events or use any photos from the Kelvin timeline, though a few facts presumed to be true in both universes are included. (i.e. The Vulcan and Romulan languages being nearly indistinguishable, and Romulan's three spoken dialects, pg. 61.)

A photo of Lansor and P'Chan from VOY: "Survival Instinct" on pg. 88 is mistakenly identified as drones being sent into Unimatrix Zero. 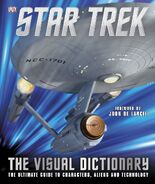 Australian edition cover
Add an image to this gallery

Retrieved from "https://memory-alpha.fandom.com/wiki/Star_Trek:_The_Visual_Dictionary?oldid=2523739"
Community content is available under CC-BY-NC unless otherwise noted.