As part of a special unit aboard the USS Voyager, the Hazard Team, you are assigned to protect the ship from hostile encounters. You can play as either Ensign Alexander Munro or Alexandria Munro, although there is no difference in the actual events of the game; for instance, characters universally refer to the protagonist as "Ensign Munro", or "Alex".

One blast from destruction, the U.S.S. Voyager is mysteriously transported into a null space infested with danger. As part of Voyager’s elite Hazard Team, you must defend it from a host of scavenging aliens, then infiltrate a Borg cube and derelict vessels to eradicate your deadly foes.

The Quake III Arena™ engine powers the dynamic gameplay as you fight for survival through 40 ultra-intense single-player missions and 16 multiplayer arenas. It’s first-person shooter action that won’t quit. But, be prepared - if Voyager is destroyed, humanity won’t be far behind...

Fight along side crewmembers with the addition of Icarus AI™, an enhancement to the Quake III Arena™ engine that allows for extraordinary team interaction.

Nine weapons - each with two firing modes - gives you eighteen different attack options. That means the firepower will be there when you need it most.

Corridors collapse, walls explode, and enemies materialize right in front of you.

There are various levels in the game, each level made up of various sections or sub-levels. Also, between levels is interaction with the crew of Voyager and mission briefings from Lieutenant Commander Tuvok.

Note: There is an optional tutorial level where Tuvok guides Munro (and the player controlling him/her) through the basics of the game. This level is not considered part of the game's official storyline.

The Hazard Team boards a Borg cube armed with an experimental weapon designed by Seven of Nine for the specific purpose of fighting the Borg: The "Infinity Modulator" (I-MOD), constantly shifting its frequency to prevent Borg shields from adapting. Unfortunately the team is ambushed and captured, with Munro the only member to escape. Munro must traverse the cube's hazardous environs to reach the location where the rest of his team are being held prisoner. After unsuccessfully attempting to hack into a Borg control panel, Munro uses his phaser rifle to destroy it, causing an explosion that envelops the area… ending the holodeck simulation. The Hazard Team has failed. Tuvok notes Munro's failure to adhere to team protocols – a failure that caused the deaths of the entire team. After being dismissed for debriefing, Munro speaks to Tuvok about the impossibility of the mission. While they head to Hazard Operations, Voyager comes under attack by an unknown ship.

After taking heavy damage from the alien ship, Voyager is able to destroy it with a spread of photon torpedoes. However, the explosion creates an isodimensional rift that transports the ship to an unknown area of space, surrounded by the wrecks of dozens of alien vessels. The events cause the warp core to overload – a breach is only averted after Munro successfully shuts the core down. Shortly thereafter, a group of Malon, Humans, Klingons, and Hirogen beam onto Voyager, and begin stealing supplies from the ship's cargo bays. They are repelled by Security and Hazard Team personnel.

The local area contains a damping field that is slowly draining power from all of Voyager's systems. Desperate for information on the graveyard and a way out, Captain Janeway orders the Hazard Team beamed to a supposedly abandoned ship. However, the team is attacked and the vessel's shields raised. Trying to cut primary power, the "Captain" of the vessel appears to Munro and begs them not to do so, as his crew in hibernation would die. A peace treaty and exchange of information is granted.

B'Elanna Torres discovers isodesium, a rare isotope, could be used to counter the effects of the power drain long enough to effect repairs and warp out. The only problem is that the only isodesium available is located on the Scavenger's base – a station made up of the remains of a mirror universe's Constitution-class starship, a Klingon Bird-of-Prey, a Hirogen hunting vessel and a Malon freighter. Infiltrating the base, Munro and his team locate samples of isodesium and prepare to set up pattern enhancers to beam out, only to have the Borg beam in, abduct Lieutenant Foster and the isodesium, and beam out.

On a mission to rescue the isodesium, Munro leads a mission onto a Borg cube, also in the graveyard, accompanied by Seven of Nine, to get the isodesium and rescue Lt. Foster. Upon finding a Borg vinculum, the Borg use it to possess Seven (or Lt. Foster will appear as a Borg drone if Munro fails to rescue him), and communicate to the Hazard Team: They will surrender the isodesium if the Hazard Team defeats an on board infestation of Species 8472, who were attacking the cube when they were transported to the graveyard. The Hazard Team succeeds, but the Borg double-cross them in much the same manner as in "Scorpion, Part II". However, Chang then detonates a detpack planted earlier, destroying the cube's vinculum and allowing the Hazard Team to escape with the isodesium.

Back on Voyager, a vessel approaches from the Forge, the structure at the center of the graveyard emitting the dampening field. With Voyager's weapons still off-line, Tuvok suggests using a nearby abandoned gunship, essentially a huge cannon with a barrel seven hundred meters long, to destroy the invaders. After stopping a group of Scavengers from taking over the gunship, the Hazard Team proceeds to a control room of the gunship. They attempt to fire the weapon at the ship approaching Voyager, but it turns out it is needed to be loaded manually. Ensign Munro, along with crewmen Chang and Csatlos, proceeds throughout the gunship and encounter maintenance and security drones that are programmed to exterminate any intruders, which comes to the team's disadvantage. Munro, Chang, and Csatlos finally get to the loading chamber to fire a charge at the invading vessel. Munro finds an alien device that seems to be a welding tool but is able to be handled as a weapon on the ship.

However, instead of destroying it, the blast has only disabled the vessel. The alien beings carried aboard the vessel invade Voyager, causing significant internal damage. They are successfully repelled, leaving their vessel intact for study. Janeway, with some persuasion from Munro, decides to use the vessel to infiltrate the Forge, and shut down the dampening field which continues to prevent Voyager's escape from the graveyard. Munro allows Biessman to return to the Hazard Alpha Team for the mission.

It soon becomes a mission to destroy the Forge itself when the Vohrsoth, the creature controlling the Forge, reveals its plan to overrun the galaxy – using the DNA of the crews trapped in the graveyard to create a massive army of "perfect warriors". Munro disobeys direct orders to eliminate the Vohrsoth personally.

With the Vohrsoth defeated, and the Forge destroyed, Voyager and the other vessels escape. Munro is promoted to lieutenant, and the crew of Voyager find themselves a few months closer to the Alpha Quadrant. There is a funeral service for everyone who died (which we don't see), and Tuvok even states why he chose Munro as a member of the Hazard Team. Everyone except him laughs when the captain asks if that was his pride she detected and he responded "Surely, Captain, there is no cause to insult me."

Other members of the Hazard Team are:

Weapons marked with an asterisk require dilithium crystals to power them. All other weapons (excepting the type 2 phaser, which has an infinite power supply) can be powered with power ports available at different stages in your missions. The "secondary trigger" has the weapon fire a secondary function of the weapon, such as grenades or increased weapon intensity (like with a phaser). 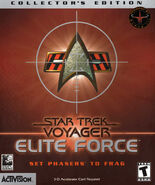