Star Trek is a three-disc Blu-ray Disc release of Star Trek. The release includes a digital copy of the film for use on PCs and portable devices. The cover has so-called "augmented reality" features – the use of a webcam presents a three-dimensional holographic tour of the USS Enterprise.

Remarkably, this edition was released a year prior to the single-disc basic, "vanilla" release, which constituted a break with franchise tradition – predominantly employed for the DVD format – as this had until then the other way around for the previous Star Trek films, Star Trek: The Motion Picture excepted.

While in some cases still being marketed as region-restricted, the releases are in actuality region-free as this has increasingly become commonplace for the Blu-ray format. [1]

As was commonplace in the industry, this release contained more special features than its DVD counterpart, as the industry favored the new Blu-ray format.

These special features were included on the single-disc release as the only ones.

It is this disc that some region B editions, such as the German one, have dispensed with. 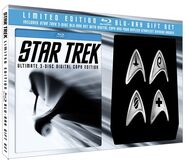