Star Trek - Les Films L'integrale was a VHS boxset released in France by CIC Video at some point in the 1990s.

Included were the first six Star Trek films, each of which being on an individual tape.

This release would eventually be succeeded by two Star Trek - L'intégrale Cinéma boxsets, which would each include eight and nine films respectively. 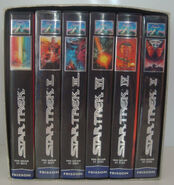 Individual spines
Add an image to this gallery

Retrieved from "https://memory-alpha.fandom.com/wiki/Star_Trek_-_Les_Films_L%27integrale?oldid=1971450"
Community content is available under CC-BY-NC unless otherwise noted.