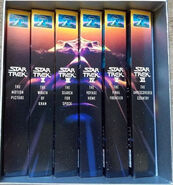 UK contents
Add an image to this gallery

In the US, the collection - catalog number 15170 - was a limited edition released by Paramount Home Video on 26 May 1993. The collection came with a gold Starfleet insignia pin. 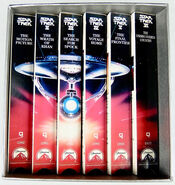 US contents
Add an image to this gallery
Retrieved from "https://memory-alpha.fandom.com/wiki/Star_Trek_-_The_Screen_Voyages_(VHS)?oldid=2266923"
Community content is available under CC-BY-NC unless otherwise noted.