Star Trek – The Three Beginnings was a VHS collection –catalogue number VHR 2827 – released by CIC Video in the UK on 31 January 1994. The collection contains the first episodes of each of the three live-action series at the time: 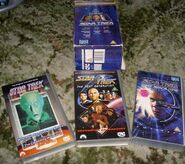 Contents
Add an image to this gallery
Retrieved from "https://memory-alpha.fandom.com/wiki/Star_Trek_-_The_Three_Beginnings?oldid=2094867"
Community content is available under CC-BY-NC unless otherwise noted.