Star Trek Adventures is a tabletop role playing game that is published by Modiphius Entertainment of London, England.

First released in August 2017, the RPG uses Modiphius' 2d20 system and features a storyline partially developed by Star Trek authors Dayton Ward and Scott Pearson. It covers the various live-action series from Star Trek: The Original Series to Star Trek: Enterprise and the Star Trek films, with the exception of those set in the alternate reality. 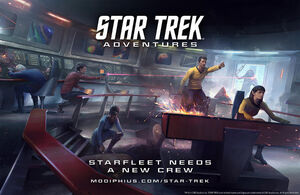 A series of character miniatures were released alongside the core rulebook, in combination with map tiles to provide environments in which to use them.

The game was first announced on 21 June 2016 and registration for the "living campaign" play-test opened in August. The play-test, which commenced in December 2016, featured both 23rd century and 24th century settings. Pre-orders for the initial wave of releases began on 7 June 2017. [1]