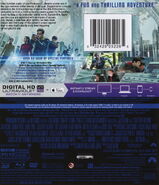 While marketed as region-restricted, the releases are in actuality region-free as this has increasingly become commonplace for the Blu-ray format.

An "enhanced commentary", similar to the one produced for Star Trek Into Darkness Blu-ray, was exclusively available at ITunes Store, and could be accessed by redeeming the digital code included in the set. [1] Unlike the Into Darkness one though, it was not physically included on any of the prior or subsequent home video format releases.