Star Trek Catan is a three- or four-player board game set during the era of Star Trek: The Original Series.

An adaptation of the publisher's renowned The Settlers of Catan, the game was created by designer Klaus Teuber, produced by Catan GmbH for Kosmos (Franckh-Kosmos Verlags-GmbH & Co.), and debuted at retail in February 2012.

The game's English translation was released in August 2012 by Mayfair Games, the US licensee of all of the Catan games, and was distributed principally through North American Target stores. A year later, a map set expansion for the game was also released.

From the publisher's website
On behalf of the Federation, you explore space with your starships and build outposts and starbases near valuable planets. There you extract important resources such as the coveted dilithium. But the Federation has also sent out other expeditions.

Therefore, you have to be wary of competitors - and of the Klingons, who want to give the players a hard time. With the aid of Captain Kirk and Mr. Spock, however, keeping the opponents in check and outperforming competitors should be an easy task.

In August 2013, Mayfair Games released the Star Trek Catan Federation Space map set expansion for the game, inspired by the "The Explored Galaxy" star chart that was seen in a number of Star Trek productions. 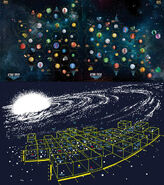