none (fan production)
ISBN 0345251377 (Ballantine)
ISBN 0806516100 (Citadel)
ISBN 1852866764 (Titan)
The Star Trek Concordance is a reference book written by Star Trek fan Bjo Trimble. The concept for this book, an episode guide beefed out with background information, was based on a privately-printed fandom publication by Los Angeles-based Mathom House Publications, established by Dorothy Jones Heydt in 1969. While the original edition was condoned by the franchise, as a fan production, it was neither officially licensed nor endorsed. In 1976, Ballantine Books chose to release an edition using their Star Trek publication license.

The Concordance cross-referenced episodes, characters, alien species, etc. from both series. Trimble gave animated material equal weight to TOS in this book, and also included fan artwork and illustrations, indicative of its origins as a fandom publication.

Unfortunately there are mistakes throughout the book, especially in the cast lists. These lists were copied to the later editions of the Star Trek Encyclopedia with the errors remaining. This has also led to fan sites listing incorrect information. Some of these errors were corrected in the updated release, along with additional names and corrections from original Desilu and Paramount call sheets.

Cover
The Concordance has a special cover featuring an above view image of the saucer of a starship on it, with the secondary hull and nacelles on the back cover. Integrated into the front cover is a turn wheel which could be used to locate any Star Trek episode. As you turn the wheel to the episode you wish to locate, the associated stardate, call letters (abbreviated letters used to identify the episode by) and which page the episode summary can be found.

Dedication
"Dedicated to three men who made this book possible: Gene Roddenberry for creating Star Trek in the first place, John Trimble for believing I could get this book together, Martin LeVita for making certain that I did it!" – Bjo Trimble, page 5.

Time Line
Found on pages 12-13 is the list of episodes organized in order of stardate.

Episodes
Found on pages 14-15 is the list of episodes organized in alphabetical order, and the pages their summaries can be found on.

Fan art
Found on pages 19-31 includes a number of images created by many known and unknown fans. Fans who contributed include:

Appendix
Located on page 256, includes an index of episode abbreviations and the pages they can be found on. 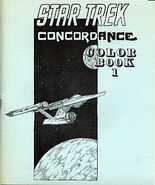 1995 Titan edition back cover
Add an image to this gallery

Retrieved from "https://memory-alpha.fandom.com/wiki/Star_Trek_Concordance?oldid=2709132"
Community content is available under CC-BY-NC unless otherwise noted.