Star Trek Generations: Beyond the Nexus

Star Trek Generations: Beyond the Nexus

The game is loosely based on the events of the seventh feature film, Star Trek Generations.

Gameplay consisted of the player using Captain Kirk or Captain Picard to solve various missions. There were three mission types: Ship, Away Team, and Puzzle.

Ship missions consisted of either combat from the bridge of the USS Enterprise-B or USS Enterprise-D. Both ships encountered Tholians, Romulans, and Klingons in combat.

Another type of ship missions consisted of navigating either Enterprise through rectangles in order to reach a desired destination to advance in the search of Dr. Tolian Soran.

Away Team missions featured a top-down perspective with the ability to fire a phaser at enemy forces.

The game also featured two puzzle modes. The objectives of the games were to decode a frequency and reroute power from one system to another system.

The game was released on the two most popular electronic hand held platforms of the '90s, the Game Boy and the Sega Game Gear. Buyers of the Game Boy version were also given reason to purchase the Super Game Boy, as the game also supported it. The Super Game Boy was a device that allowed one to play specially supported Game Boy games on a regular TV with the aid of a Super Nintendo Entertainment System.

The Sega Game Gear version utilized full color graphics. The three versions of the title screenshot are provided below.

Game Boy screenshot of the Enterprise-B 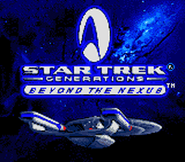