Originally released in 1983 in the US and subsequently re-released in the widescreen format in 1991. In the UK, it was released in 1984, with Japan getting a release in 1985 and a re-release in 1991. France got a release in 1992 with Germany and Italy getting the film in 1993, the same year it was released in Widescreen for the first time in Japan as part of the box set Star Trek: The Complete Collection, along with a rental only copy. Japan got a standalone Widescreen release the next year on 10 March 1994. In 1996, TWOK was part of the box set Star Trek - The Screen Voyages, released in the UK, their first WS version, and Germany. France also had a re-release of the film that year, although not part of a box set. The final release was part of the box set Star Trek: The Bilingual Collection in Japan, which dubbed the film into Japanese for the first time. A release also took place at some unknown time in Spain. 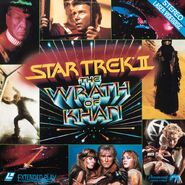