Originally released in the US, UK, and Japan in 1985, it was re-released several times in all three countries. The US got a Widescreen version in 1991 while Japan got another Pan & Scan version. In 1992, France and the Netherlands had a copy released, and Japan's Widescreen version was released as part of the box set Star Trek: The Complete Collection. A rental-only copy in Japan and Germany followed the next year. Japan got a Widescreen standalone copy in 1994. The UK and Germany got the box set Star Trek - The Screen Voyages in 1996, while France got a standalone re-release. The final copy was in 1998 as part of the box set Star Trek: The Bilingual Collection, which dubbed the film into Japanese for the first time. It was also released at some unknown time in Spain. 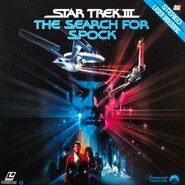