Blurb
Summer 2013 will be all about Star Trek Into Darkness. The long-awaited sequel returns boldly where fans have gone for more than 40 years, aboard the starship Enterprise.

The Star Trek Into Darkness 2014 Wall Calendar features all new images of Chris Pine as Kirk, Zachary Quinto as Spock, Karl Urban as McCoy, and Zoe Saldana as Uhura. 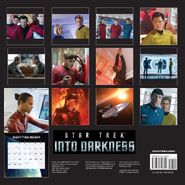 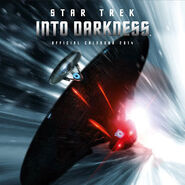 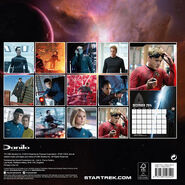 Back cover, UK edition
Add an image to this gallery

Retrieved from "https://memory-alpha.fandom.com/wiki/Star_Trek_Into_Darkness_Calendar_(2014)?oldid=2425026"
Community content is available under CC-BY-NC unless otherwise noted.