The Star Trek Latinum Card was a 1998 promotion offered by CIC Video in the United Kingdom in order to encourage customers to purchase more tapes. The promotion took its name from latinum, the currency favored by the Ferengi.

Members of the scheme collected latinum tokens, stickers that were given away with the VHS releases of DS9 season 6 and Voyager season 4. Each token was worth ten points, and tokens could be exchanged for collectibles, divided into tiers. The maximum points available were 220 for customers who purchased all tapes from both seasons.

Unless otherwise stated, these items feature a Star Trek logo with the insignia from Star Trek: The Original Series. Depending on the value of the item, a cash charge may have been payable in addition to the tokens.

Front of the box

Back of the box 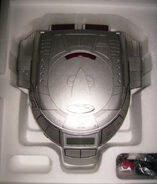 The CD player
Community content is available under CC-BY-NC unless otherwise noted.
Advertisement