Star Trek Nemesis was the penultimate of the basic, "vanilla" Star Trek films DVD releases. Unlike the previous releases, the DVD contained some special features.

The Region 1 release was the only one of the films to be issued in both Widescreen and Pan & Scan formats. The Region 2 European release came in a holographic slipcase. Oddly, the disc and insert portrayed Jean-Luc Picard in a TNG-style Starfleet uniform.

Like most DVDs, the film has been sectioned into chapters, similar to tracks on a CD. The titles of these chapters are listed below.

In Japan (region 2), this edition saw a three-disc "Special Can DVD Box" release in 2004, limited to 5,000 copies. Apart from the feature and the special features (each on a separate disc), a third disc was included containing the episodes:

The release was packaged in a circular hard plastic standing disc holder, supposedly a desktop ornament.

A similar limited edition set was also released in Germany the same year. This release had the feature and special features on one disc and the third disc included the soundtrack of the film. 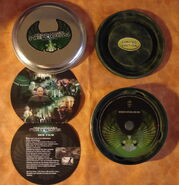