20
The Star Trek Online Starships Collection is a British partwork magazine and product line that debuted on 6 June 2020 and is published by Eaglemoss Collections under its Hero Collector imprint.

In partnership with Perfect World (Arc Games)/Cryptic Studios and authorized and licensed by CBS Consumer Products, it is available from company webshops and other specialty retailers in a number of countries worldwide.

Each issue includes a magazine and a hand-painted [1] four to six inch-long ABS and die-cast metal scaled replica of a starship from Star Trek Online, the massively multiplayer online role-playing game.

A twenty-page magazine (measuring 145 × 183 mm) fits within the windowbox package (beneath the model) and commonly features three main sections, including an "in-universe" profile of the starship, a behind-the-scenes exploration of the ship's design history, and an article about broader STO lore.

A 50%-off coupon for a Tier 6 starship for the video game is included with each issue.

Ben Robinson, John Ainsworth, and Thomas Marrone (β), the project's managers, utilize the original CGI models from the video game as reference for the miniatures and for many of the illustrations and orthographic views within the magazine.

Marrone, the lead artist for the game's Starship and UI art teams and a STO starship designer in his own right, is the lead art editor, the creator of many renders for the magazine, the source of paint guides of the game's CG models, and the author of the magazines' text content.

Ainsworth coordinates the production of the physical miniatures from start to finish, while Fabio Passaro's Meshweaver Productions provides format conversions. [2] Notably, a variety of ship designs from the game, including a number by designers Marrone, Hector Ortiz (β), and Ian Richards (β), are being mass-produced as miniatures for the first time.

Contents, size, and scaling info courtesy of Wixiban.com. [3]
*Starship length as measured from bow to stern, where applicable. 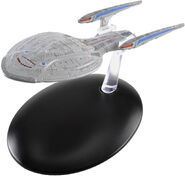 USS Enterprise-F in "Federation livery" from the Official Starships Collection 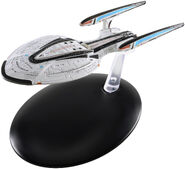 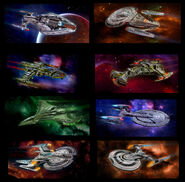 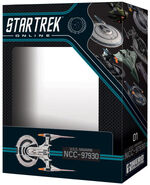 Retrieved from "https://memory-alpha.fandom.com/wiki/Star_Trek_Online_Starships_Collection?oldid=2740855"
Community content is available under CC-BY-NC unless otherwise noted.