Star Trek Panic is a one-to-six player tabletop strategy game produced by USAopoly and Fireside Games. Released in May 2016, the game is a variation of the tabletop game Castle Panic, and introduces some additional mechanics unique to this version.

From the publisher's website
Star Trek Panic, a new out-of-this-world board game that merges the classic tower defense style play of the Panic series with the most iconic elements of the original Star Trek universe. Under license by CBS Consumer Products, Star Trek Panic boldly goes where no one has gone before as players join the crew of the USS Enterprise on a voyage to defend the ship from enemy attacks and carry out five vital galactic missions. 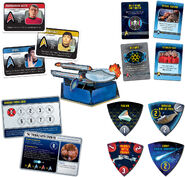 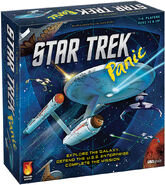 Game box
Add an image to this gallery

Retrieved from "https://memory-alpha.fandom.com/wiki/Star_Trek_Panic?oldid=2705846"
Community content is available under CC-BY-NC unless otherwise noted.