Star Trek Pinball is a series of pinball machines designed and built by Stern Pinball in 2013. The machines' designs are based on the alternate reality established in Star Trek and Star Trek Into Darkness.

Designed by Steve Ritchie, the designer of the Next Generation pinball machine in the 1990s, the machine comes in three versions: Starfleet Pro, Vengeance Premium, and Enterprise Limited Editions. The three versions feature individually-designed cabinets and backglasses.

Karl Urban appeared in a promotional video for the Pro pinball machine which was shot in Vancouver, Canada. He also recorded a "Custom Speech Powerpack" audio update for the machine in the role of "Bones". [1] 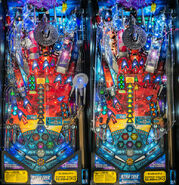 Playfields for the Limited and Premium (L) and Pro Editions (R)

Retrieved from "https://memory-alpha.fandom.com/wiki/Star_Trek_Pinball_(Stern_Pinball)?oldid=2396762"
Community content is available under CC-BY-NC unless otherwise noted.