Star Trek Scene It? is an interactive, DVD-based board game by Mattel and Screenlife. Questions are based on the first five live-action Star Trek television series and the first ten feature films. Questions may be read from cards or are featured on the DVD. Actress Judi Durand voiced the role of the Starfleet computer for the game.

Four versions of the game have been released: a boxed Regular Edition, two Deluxe Editions (the Ships Edition and the Captain's Edition), and the Ultimate Fan Pack Limited Edition.

Both Deluxe Edition games differ from the Regular Edition as follows:

NOTE: When originally solicited, the Captain's Edition was slated to have five "Captain" movers (Kirk, Picard, Sisko, Janeway & Archer) in place of ships, but this did not occur. The cover art on the tin boxes is the only difference between the two Deluxe Editions.

The Ultimate Fan Pack Limited Edition included the Regular Edition of the game packed with six individually-packaged Hot Wheels die-cast and plastic starship miniatures. It was released exclusively in North America at Costco stores in September 2010. The following ships were included: 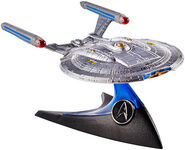 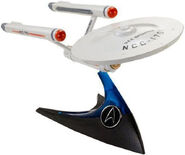 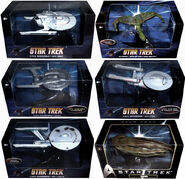 As with most versions of SCENE IT?, the object is to be the first player to reach the center of the "Final Frontier" circle (named "Final Cut" in other versions) to win the game.

Players roll both dice to (a) move around the game track, and (b) determine what action is to take place (getting a Trivia Challenge question from card; playing a DVD Challenge; drawing a Prime Directive card, or Player's Choice of any of the above). Winning a Challenge allows the player to continue their turn and roll again.

The game track incudes several "Warp Speed" spaces. Landing there and completing a Challenge allows the player to move DOUBLE the distance of the Numbered Die on their next roll.

Stardate
Questions on major events in the TREK universe

Who Am I?
Identify the character, alien, planet or object described using the four clues provided.

Energize
Identify the character removed from an episode or movie still.

Sensor Readings
Identify the starship from a distorted image which slowly resolves itself.

Finish the Line
Identify the next line following a displayed scene.

Spatial Anomaly
Identify the character from a distorted image.

Questions based on scenes
Answer a question based on a displayed scene, or the episode from which the scene originates.

First Contact
Identify the species from a pixelated image.

What's Missing?
Identify the item removed or hidden from an image.

Final Frontier
A series of challenging questions which must be answered in order to win the game. 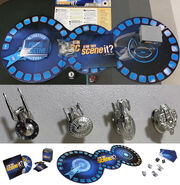 Game board and components