This was the only Video 8 movie title, known to have been released the same year the movie itself premiered. 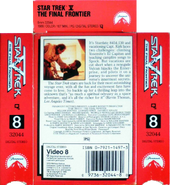 Back cover
Community content is available under CC-BY-NC unless otherwise noted.
Advertisement